The Ideal Operational Amplifier is basically an amplifier which amplifies the difference between the two input signals. In its basic form, the Op Amp is nothing but a differential amplifier. To understand the Ideal Characteristics of Operational Amplifier, let us discuss the operation of an ideal differential amplifier which is a basic building block of an op-amp. 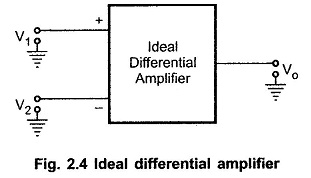 From the equation (1) we can write,

The difference between the two inputs (V1 — V2) is generally called difference voltage and denoted as Vd.

Hence the differential gain can be expressed as,

Generally the differential gain is expressed in its decibel (dB) value as,

If we apply two input voltages which are equal in all the respects to the differential amplifier i.e. V1 = V2 then ideally the output voltage Vo =  (V1 – V2)Ad, must be zero. But the output voltage of the practical differential amplifier not only depends on the difference voltage but also depends on the average common level of the two inputs. Such an average level of the two input signals is called common mode signal denoted as Vc.

This shows that if one input is + 25 μV and other is – 25 μV then the output of the amplifier will not be same, with the inputs as 600 μV and 650 μV, though the difference between the two sets of the inputs is 50 μV.

The ability of a differential amplifier to reject a common mode signal is expressed by a ratio called common mode rejection ratio denoted as CMRR or ρ.

Many a times, CMRR is also expressed in dB, as

With the background of an ideal differential amplifier and CMRR, let us study the ideal op-amp characteristics. 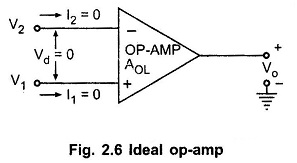 The Fig. 2.6 Above shows an ideal op-amp. It has two input signals V1 and V2 applied to non-inverting and inverting terminals, respectively.

The following things can be observed for the ideal op-amp shown in the Fig. 2.6.

Infinite voltage gain : It is denoted as AOL. It is the differential open loop gain and is infinite for an ideal Op Amp.

Zero output impedance: The output impedance is denoted as Ro and is zero for an ideal Op Amp. This ensures that the output voltage of the op-amp remains same, irrespective of the value of the load resistance connected

Zero offset voltage : The presence of the small output voltage though V1 = V2 = 0 is called an offset voltage. It is zero for an ideal op-amp. This ensures zero output for zero input signal voltage.

Infinite bandwidth : The range of frequency over which the amplifier performance is satisfactory is called its bandwidth. The bandwidth of an ideal op-amp is infinite. This means the operating frequency range is from 0 to ∞. This ensures that the gain of the op-amp will be constant over the frequency range from d.c. (zero frequency) to infinite frequency. So op-amp can amplify d.c. as well as a.c. signals.

The slew rate is important parameter of Ideal Operational Amplifier. When the input voltage applied is step type which changes instantaneously then the output also must change rapidly as input changes. If output does not change with the same rate as input then there occurs distortion in the output. Such a distortion is not desirable. Infinite slew rate indicates that output changes simultaneously with the changes in the input voltage.

The parameter slew rate is actually defined as the maximum rate of change of output voltage with time and expressed as in V/μs.

Its ideal value is infinite for the Op Amp.

No effect of temperature : The characteristics of Ideal Operational Amplifier do not change with temperature.

So if VEE is constant and due to change in VCC, there is change in input offset voltage then PSRR is expressed as

For a fixed VCC, if there is change in VEE causing change in input offset voltage then,

It is expressed in mV/V or μV/V and its ideal value is zero.

These ideal characteristics of op-amp are summarized in the Table Below 2.1 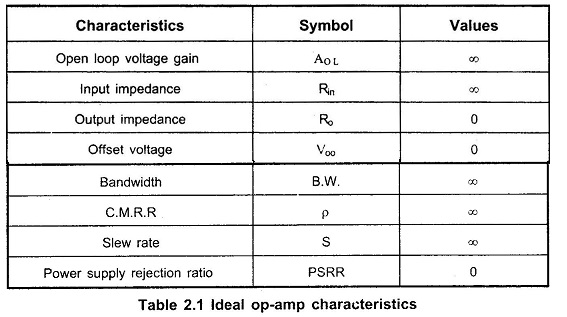