A Differentiator using Op Amp circuit that performs the mathematical operation of differ­entiation. It produces an output voltage proportional to slope of the input volt­age. A common application of a differentiator is the detection of the leading and trailing edges of rectangular pulse. 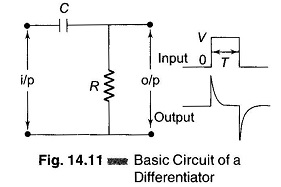 Over the trailing edge of a pulse, the input voltage steps negatively and we get a negative spike. For a CR Differentiator to produce narrow spikes the time constant must be 10 times smaller than period T. 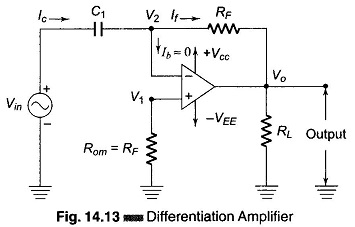 A rectangular input, shown in Fig. 14.12 (a), is used to obtain positive and negative spikes. The leading edge of the pulse is approximately a positive ramp, so that the output is a negative spike of very short duration. Similarly, the trailing edge of the input pulse is approximately negative ramp, so that the out­put is a very narrow positive spike. Similarly, if a triangular waveform is given as input, a square waveform is obtained at the output.

A basic differentiator using Op Amp is constructed from a basic inverting amplifier by replac­ing the input resistor R1 by a capacitor C1 as shown in Fig. 14.13. Using Kirchoff’s current equation at node V2 is Ic = Ib + If. Since Ib ≡ 0,

From the above equation it can be seen that a differentiator performs the opposite function of integration. If a cosine wave is applied as the input, a sine wave will be produced at the output, and a triangular wave as the input will produce a square wave at the output.

The Differentiator using Op Amp of Fig. 14.13 has a tendency to oscillate which is undesirable. 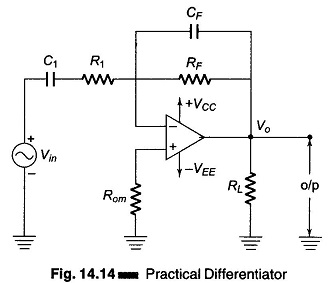 The differentiating circuit is most commonly used in wave shaping circuits to detect high frequency components in an input signal and as a rate of change detector in FM modulators. It is also used in triggering the time base generator in an oscilloscope.

To design a practical differentiator using Op Amp the following parameters are required.