There are basically four useful Types of Active Filters. Namely

The Butterworth filter has an essentially flat amplitude versus frequency response up to the cutoff frequency. The sharpness of the cutoff can be seen in Fig. 15.27, where it is compared with the Chebyschev and the Bessel filter. 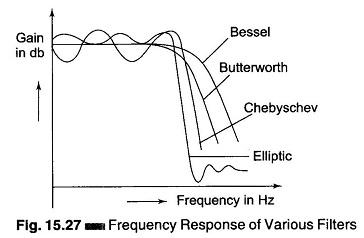 It is to be noted that all three filters reach a roll-off slope of – 40 db/decade at frequencies much greater than cut off. Although Butterworth filters achieve the sharpest attenuation, their phase shift as a function of frequency is non-linear.

Butterworth filters are also known as maximally flat type filters. This class of filters approximates the ideal filter well in the pass band. It has a monotonic decrease in gain with frequency in the cutoff region and a maximally flat response below cut-off, as shown in Fig. 15.28.

The Butterworth filter has characteristics somewhere between Chebyschev and Bessel filter. It has a moderate roll-off of the skirt and a slightly non-linear phase responses.

The Chebyschev filter, also called the equal ripple filter, gives a sharper cutoff than the Butterworth filter in the pass band. A comparison of these two filters is shown in Fig. 15.28. 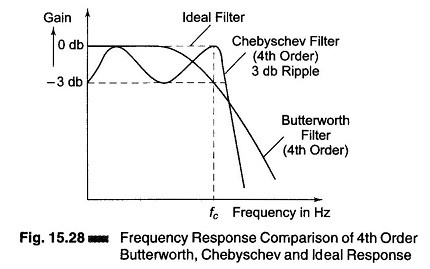 Both Butterworth and Chebyschev filters exhibit large phase shifts near the cutoff frequency.

If very sharp roll-off is desired, a Chebyschev filter is used. However, this is obtained at the expense of a gain ripple in the lower frequency pass band.

A disadvantage of the Chebyschev filter is the appearance of gain maxima and minima below the cutoff frequency. This gain ripple, expressed in dbs, is an adjustable parameter in filter design.

The faster the roll-off, the greater the peak-to-peak ripple in the pass band. The phase response is highly non-linear in the skirt region. Such unequal delays of data frequency in the pass band causes severe pulse distortion and thus increased errors at modem demodulators. This can overcome somewhat by increasing the band width of the filter so that the phase region is extended.

For applications where the phase is important, the Bessel filter, which is a minimal phase shift filter is used, even though its cut off characteristics is not very sharp. 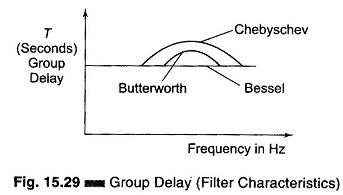 The elliptic filter has the sharpest roll-off of all filters in the transition region, but has ripples in both the pass band and stop band regions, as shown in Fig. 15.27.