But due to the resistance in the components used in cascade connection, the attenuation in pass band slightly increases, instead of being zero. Thus the curve becomes rounded off at the cut off frequency in pass band as shown in the Fig. 9.24. 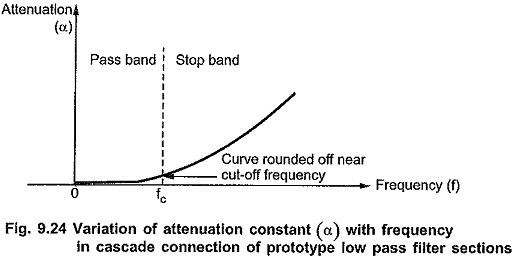 Consider any general T section and a new section derived from it as shown in the Fig. 9.25 (a) and (b).

For a prototype section, the characteristic impedance is given by,

Similarly for a m-derived section, the characteristic impedance is given by,

To maintain same Z0, equating equations (1) and (2) by squaring, 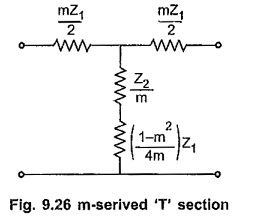 The same technique can be used to obtain m-derived π section. Consider any general π section with shunt arm of same type but having different value i.e.  Z2/m as shown in the Fig. 9.27.

For a prototype π section, the characteristic impedance Z0π is given by,

Similarly for a m-derived π section, the characteristic impedance is given by,

Squaring equations (4) and (5) and equating, 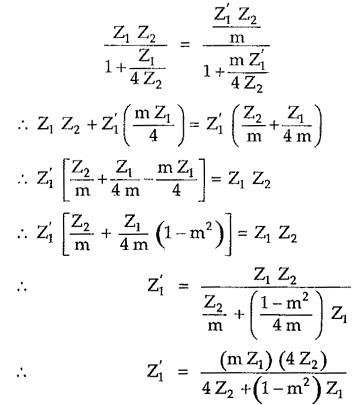 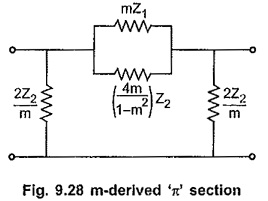 Consider the m-derived T and π sections as shown in the Fig. 9.28 and Fig. 9.30. If we put m=1, both sections reduce to corresponding prototype sections. As m is a constant, for different values of m, we can design infinite m-derived sections for same fc and z0 specifications. The shunt arm of T section is a series combination of impedances interms of Z1 and Z2 ; while series arm of π section is a parallel combination of impedances in terms of Z1 and Z2. But we know that Z1 and Z2 must be of different types. So to maintain this relationship in the shunt arm of T section and the series arm of π section, factor 1-m2/4m must be positive which gives m always positive. As we have seen earlier, for m=1, we get original prototype filter sections. Thus the value of m must be always selected as