When opamp is used without feedback (open loop operation), the amplifier output is usually in one of its saturated states. The application of a small differ­ence input signal of appropriate polarity causes the output to switch to its other saturation states.

Therefore, a Comparator is a circuit with two inputs and a single output. The two inputs can be compared with each other, i.e., one of them can be considered a reference terminal.

Similarly, the opamp goes to negative saturation, as soon as the voltage at the non-inverting terminal goes slightly below ground level. 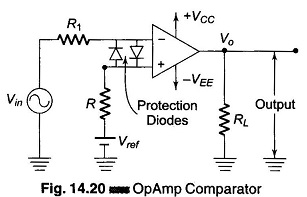 The Op Amp Comparator Circuit shown in Fig. 14.20, consists of a fixed reference voltage (Vref) applied to the inverting input terminal and a sinusoidal signal Vin applied to the non-inverting terminal. As discussed earlier, when Vin is greater than Vref, the output voltage goes to positive saturation, i.e. Vout = +Vsat = +Vcc and when Vin is less than Vref, the output goes to negative saturation, i.e. Vout = – Vsat = – VEE. 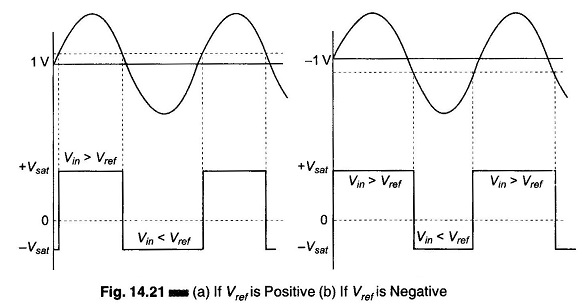 Hence the output changes from one saturation level to another whenever Vin ≡ Vref, as shown in Fig. 14.21.

Similarly, an inverting compa­rator can also be obtained by applying the sinusoidal input to the inverting terminal. 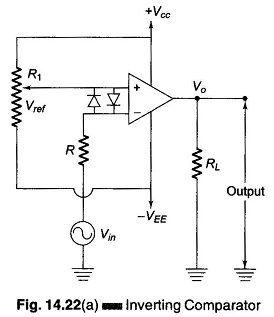 Figure 14.22 (a) shows the circuit for an inverting comparator, the input-output waveforms are shown in Fig. 14.22. (b). In this cir­cuit, Vref is obtained by the use of a potentiometer which forms a potential divider arrangement. Op Amp Comparator Circuits are used as discriminators, volt­age level detectors, oscil­lators, digital interfacing, Schmitt trigger, etc. 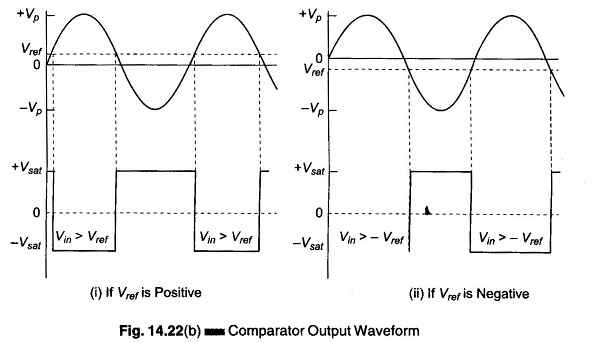