Comparator Equation in Power System Protection – Taking a very general case to cover the complete range of conventional relay characteristics, let S1 and S2 be the two input signals such that when the phase relationship or magnitude relationship obeys predetermined threshold conditions, tripping is initiated. The input signals are derived from the primary power system via current and voltage transformers. These signals may be derived from the primary voltage or current or from both, the latter necessitating some form of mixing device such as a current voltage transactor as shown in Fig. (4.1).

where K1 and K3 are scalar constants and K2 and K4 vector constants with angles θ2 and θ4, respectively. Taking A as the reference vector and vector B to lag A by an angle Φ, Eq. (4.1) reduces to

Equation (4.5) represents the equation of a circle on the β-plane having |B/A| cos Φ and j |B/A| sin Φ as coordinates represented as |B/A|p j |B/A|q. This circle has 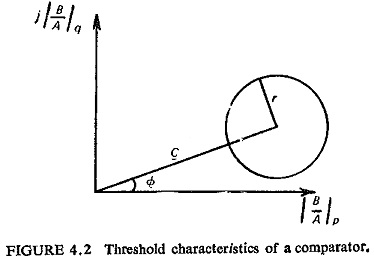 The two quantities to be compared are S1 and S2. If α is the phase angle of input S1 and β that of S2, the relay operates when the product of S1 and S2 is positive. The product is maximum when the two quantities are in phase. All the conventional characteristics of relays can be obtained with a symmetrical phase comparator with (α – β) = ±90°. Therefore, this is the threshold condition, i.e.

Values of r and c for plot on the α-plane can be obtained, similarly.

In most relays at least one of the constants K(i.e. K1, K2, K3, K4) is zero and two of them are often equal. Also the angle of the two vector constants is usually the same. This makes the practical case relatively simple.

Duality Between Amplitude and Phase Comparators:

Consider the operation of an amplitude comparator with input signals A and B. It operates, say, when

It has now become an inherent phase comparator as shown in Fig. (4.3) vector diagram, i.e. if the inputs are changed to (A + B) and (A—B) the original amplitude comparator would compare phases of A and B. 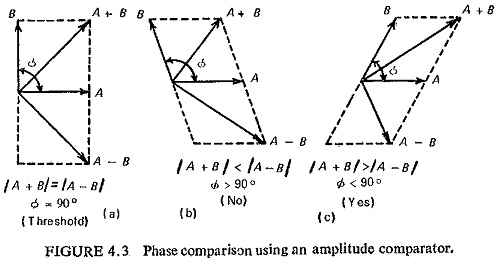 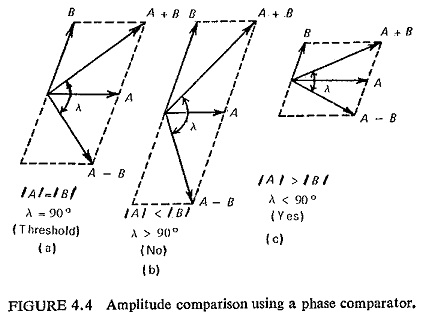 Though a given relay characteristic can be obtained using either of the two comparators, consideration of the constants calculated for required characteristics would indicate which type of comparator is preferable. In general an inherent comparator is better than the converted type, because if one quantity is very large compared with the other, a small error in the large quantity may cause an incorrect comparison when their sum and difference are supplied as inputs to the relay.