Power Angle Equation of Synchronous Machine – In solving the swing equation (Eq. (12.10)), certain simplifying assumptions are usually made. These are:

Before the swing equation can be solved, it is necessary to determine the dependence of the electrical power output (Pe) upon the rotor angle.

For a nonsalient pole machine, the per phase induced emf-terminal voltage equation under steady conditions is

and usual symbols are used.

Equation (12.19) during the transient modifies to 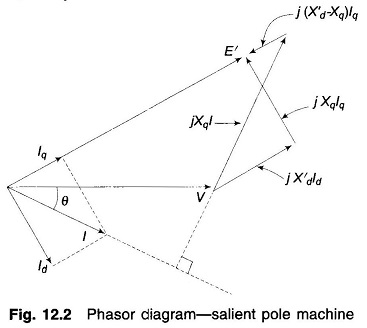 Since under transient condition, X′d < Xd but Xq remains almost unaffected, it is fairly valid to assume that

The Power Angle Equation of Synchronous Machine model corresponding to Eq. (12.24) is drawn in Fig. 12.3 which also applies to a cylindrical rotor machine where X′d = X′q = X′s(transient synchronous reactance) 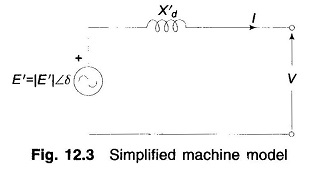 The simplified Power Angle Equation of Synchronous Machine of Fig. 12.3 will be used in all stability studies.

For the purposes of stability studies |E′|, transient emf of generator motor, remains constant or is the independent variable determined by the voltage regulating loop but V, the generator determined terminal voltage is a dependent variable. Therefore, the nodes (buses) of the stability study network pertain to the emf terminal in the machine model as shown in Fig. 12.4, while the machine reactance (X′d) is absorbed in the system network as different from a load flow study. Further, the loads (other than large synchronous motors) will be replaced by equivalent static admittances (connected in shunt between transmission network buses and the reference bus). This is so because load voltages vary during a stability study (in a load flow study, these remain constant within a narrow band). 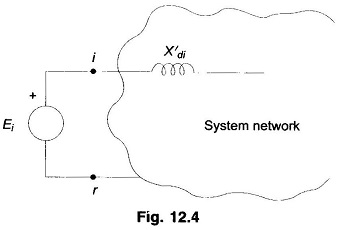 Complex power into bus is given by

Since in solution of the swing equation only real power is involved, we have from Eq. (12.26)

A similar equation will hold at bus 2.

For a purely reactive network 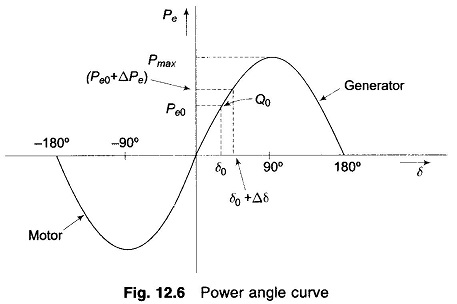 which, as already stated, is a non-linear second-order differential equation with no damping.