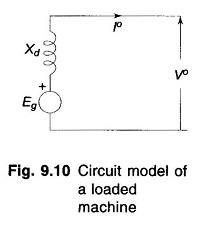 Figure 9.10 shows the circuit model of a Short Circuit Current of Loaded Synchronous Machine operating under steady conditions supplying a load current I° to the bus at a terminal voltage of V°. Eg is the induced emf under loaded condition and Xd is the direct axis synchro­nous reactance of the machine. When short circuit occurs at the terminals of this machine, the circuit model to be used for computing short circuit current is given in Fig. 9.11a for subtransient current, and in Fig. 9.11b for transient current. The induced emfs to be used in these models are given by

Synchronous motors have internal emfs and reactances similar to that of a generator except that the current direction is reversed. During short circuit conditions these can be replaced by similar circuit models except that the voltage behind subtransient/transient reactance is given by