So far we have carried out short circuit calculations for simple systems whose passive networks can be easily reduced. In this section we extend our study to large systems. In order to apply the four steps of Algorithm for Short Circuit Computation developed earlier to large systems, it is necessary to evolve a systematic general algorithm so that a digital computer can be used. 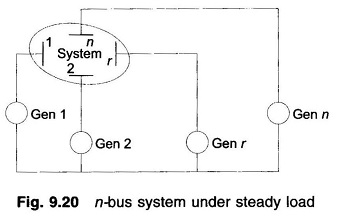 Consider an n-bus system shown schematically in Fig. 9.20 operating at steady load. The first step towards Short Circuit Computation is to obtain prefault voltages at all buses and currents in all lines through a load flow study. Let us indicate the prefault bus voltage vector as

Let us assume that the rth bus is faulted through a fault impedance Zf. The postfault bus voltage vector will be given by

As step 2, we drawn the passive Thevenin network of the system with generators replaced by transient/subtransient reactances with their emfs shorted (Fig. 9.21).

As per step 3 we now excite the passive Thevenin network with – V°r in series with Zf as in Fig. 9.21. The vector ΔV comprises the bus voltages of this network.

Since the network is injected with current -If only at the rth bus, we have

By step 4, the voltage at the rth bus under fault is

However, this voltage must equal

Postfault currents in lines are given by 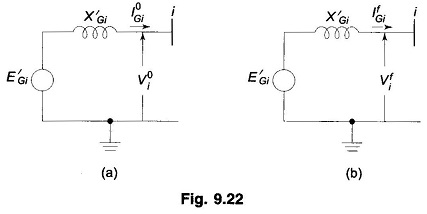 From the SC study, Vfi is obtained, It then follows from Fig. 9.22(b) that