Another class of duty for normally occurring loads is Short Time Intermittent Duty in which the load requires a constant power for a short interval of time and rests for sufficiently longer time. When a motor is used for this purpose, duration of the load on the motor is less than the heating time constant of the motor or the time required for obtaining thermal equilibrium. The period of rest is sufficient enough to cool the motor to the ambient temperature. The next cycle begins therefore from a cold condition. Such loads occur in some crane drives, household appliances, opening and closing of weirs, lockgates, bridges, etc. The load diagram for this Short Time Intermittent Duty is shown in Fig. 5.14. 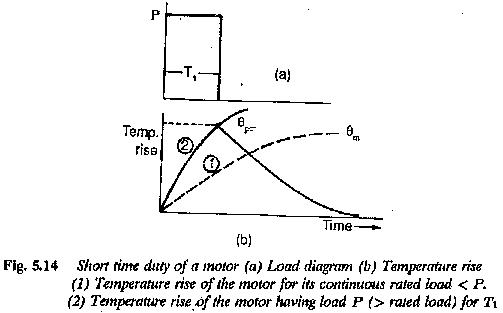 An electric motor, as has already been pointed out, will have steeply rising losses when it is overloaded. However there is a time lag between the losses taking place and temperature rise. Therefore, a given machine may be overloaded for a time till it reaches the permissible temperature rise and then switched off, allowing it to cool to the ambient temperature in the rest period. A machine of suitable rating is chosen such that it attains its permissible temperature rise during the period of application of load. When a machine is overloaded this way, the internal hot spot temperatures may reach a very high value. The simplified model gives a rough estimate of the motor rating.

A machine of smaller capacity may be advantageously used to drive these loads for short time. Considering the heating of the motor over a cycle

If a motor is selected having a rating equal to the amplitude of the power pulse represented by load the diagram, the temperature rise follows curve 1 of Fig. 5.14. From this it is very clear that at the end of duration of load t, when the motor is switched off its temperature rise is well below the permissible value. The motor is underutilised with regard to its thermal capacity. If, on the other hand, a motor of smaller capacity is chosen, when loaded to give an output corresponding to power pulse of load diagram, it is overloaded and has a temperature rise curve shown by curve 2 of Fig. 5.14. From the figure it is clear that the temperature of the motor rises rapidly towards another maximum value, as decided by the increased losses of the motor. In so doing it attains the permissible temperature rise at the end of t1. The motor is switched off at this instant. The rating of the motor is called short time rating. The motors may have. 10 minute, 30 minute or 60 minute rating based on this criterion. The motor is thermally well utilised. A short time rating of an electric motor can be defined as the extrapolated overload rating of the motor which it can supply for the specified short time without getting overheated. Now a days the machines are being designed and manufactured for short duration having sufficient overload torque capability.

Using the temperature rise curve the short time rating of the given motor can be determined. Referring to Fig. 5.14 the machine having a continuous rating of Pr is used to drive the load P so that it reaches θmax(θper) at the end of t1 according to curve 2 of the figure. The temperature curve of the motor is curve 1, shown in Fig. 5.14. The curve 2 extends exponentially toward θ′max which would be the maximum, temperature rise of the motor if the drive motor were loaded continuously with P. Therefore

Using these relations and simplifying, the rating Pr of the motor to drive load of P can be obtained as

Sometimes it may be required to estimate the time of operation of a given motor of continuous rating Pr to drive the load P. For this we know (P/Pr). The value of t1 can be obtained from the equation.

The ratio of losses given by Eq. 5.44 represents the thermal overload and the ratio (P/Pr) from Eq. 5.47 represents the mechanical overload. These are shown in Fig. 5.15. From the figure as well as equations, it can be seen that increase in power output is possible by decreasing tl.

An overload ratio must be chosen within the available torque range. The machine must be capable of providing the overload without stalling, because there is an absolute limit for motors exhibiting pull-out effect, In commutator machines the commutator presents another limitation.

However, to drive high torque (power) pulses in this Short Time Intermittent Duty, the motor may be equipped with a flywheel having sufficient inertia. This is brought to the required speed before the load is applied. The energy stored in the flywheel during acceleration is given to the load.