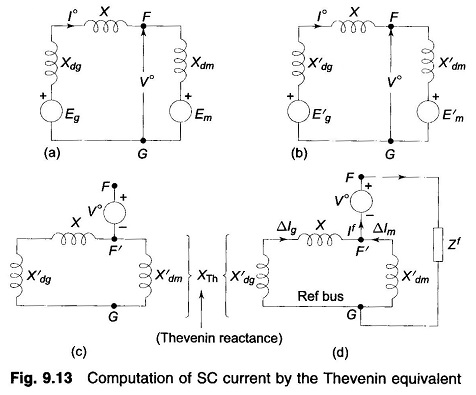 As seen from FG the Thevenin equivalent circuit of Fig. 9.13b is drawn in Fig. 9.13c. It comprises prefault voltage V° in series with the passive Thevenin impedance network. It is noticed that the prefault current I° does not appear in the passive Thevenin impedance network. It is therefore to be remembered that this current must be accounted for by superposition after the SC solution is obtained through use of the Thevenin equivalent.

Consider now a fault at F through an impedance Zf . Figure 9.13d shows the Thevenin equivalent of the system feeding the fault impedance. We can immediately write

Postfault currents and voltages are obtained as follows by superposition:

where ΔV = -jXThIf is the voltage of the fault point F′ on the Thevenin passive network (with respect to the reference bus G) caused by the flow of fault current If.

An observation can be made here. Since the prefault current flowing out of fault point F is always zero, the postfault current out of F is independent of load for a given prefault voltage at F.

The above approach to SC computation is summarized in the following four steps:

The following assumptions can be safely made in SC computations leading to considerable computational simplification:

The first assumption is quite close to actual conditions as under normal operation all voltages (pu) are nearly unity.

The changes in current caused by Short Circuit Current Computation are quite large, of the order of 10-20 pu and are purely reactive; whereas the prefault load currents are almost purely real. Hence the total postfault current which is the result of the two currents can be taken in magnitude equal to the larger component (caused by the fault). This justifies assump­tion 2.