Short Circuit of a Synchronous Machine on No Load: 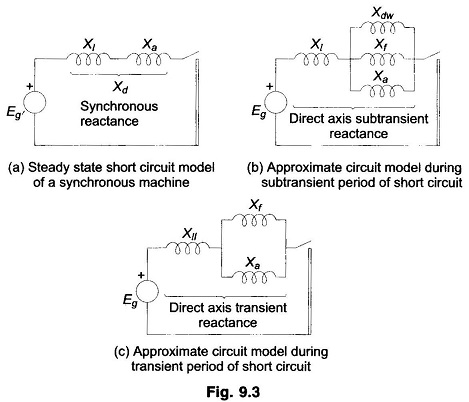 Consider now the sudden short circuit (three-phase) of a synchronous generator initially operating under open circuit conditions. The machine undergoes a transient in all the three phase finally ending up in steady state conditions described above.

Immediately in the event of a short circuit, the symmetrical short circuit current is limited only by the leakage reactance of the machine. Since the air gap flux cannot change instantaneously (theorem of constant flux linkages), to counter the demagnetization of the armature short circuit current, currents appear in the field winding as well as in the damper winding in a direction to help the main flux. These currents decay in accordance with the winding time constants.

is called the subtransient reactance of the machine. While the reactance effective after the damper winding currents have died out, i.e. 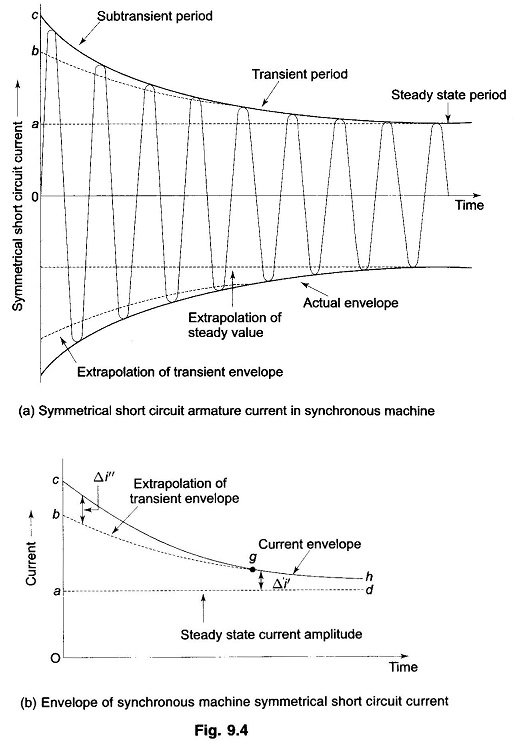 In terms of the oscillogram, the currents and reactances discussed above, we can write

The intercept Ob for finding transient reactance can be determined accurately by means of a logarithmic plot. Both Δi″ and Δi′ decay exponentially as

where Tdw and Tf are respectively damper, and field winding time constants with Tdw ≪ Tf . At time t ≫ Tdw, Δi″ practically dies out and we can write 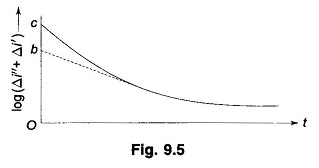 The plot of log (Δi″ + Δi′) versus time for t ≫ Tdw therefore, becomes a straight line with a slope of (- Δi′0/Tf) as shown in Fig. 9.5. As the straight line portion of the plot is extrapolated (straight line extrapolation is much more accurate than, the exponential extrapolation of Fig. 9.4), the intercept corresponding to t = 0 is