We shall define the inertia constant H such that

Taking G as base, the inertia constant in pu is 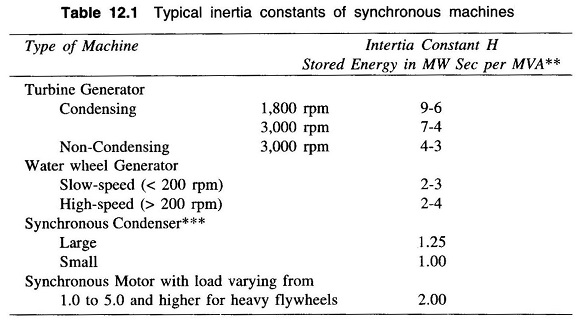 It is observed from Table 12.1 that the value of H is considerably higher for steam turbogenerator than for water wheel generator. Thirty to sixty per cent of the total inertia of a steam turbogenerator unit is that of the prime mover, whereas only 4 – 15% of the inertia of a hydroelectric generating unit is that of the waterwheel, including water.

Figure 12.1 shows the torque, speed and flow of mechanical and electrical powers in a synchronous machine. It is assumed that the windage, friction and iron-loss torque is negligible. The differential equation governing the rotor Dynamics of Synchronous Machine can then be written as

While the rotor undergoes Dynamics of Synchronous Machine as per Eq. (12.3), the rotor speed changes by insignificant magnitude for the time period of interest (1s). Equation (12.3) can therefore be converted into its more convenient power form by assuming the rotor speed to remain constant at the synchronous speed (ωsm). Multiplying both sides of Eq. (12.3) by ωsm′ we can write

It is more convenient to measure the angular position of the rotor with respect to a synchronously rotating frame of reference. Let

Dividing throughout by G, the MVA rating of the machine,

This equation (Eq. (12.10)/Eq. (12.11)), is called the swing equation and it describes the rotor dynamics for a synchronous machine (generating/motoring). It is .a second-order differential equation where the damping term (proportional to dδ/dt) is absent because of the assumption of a lossless machine and the fact that the torque of damper winding has been ignored. This assumption leads to pessimistic results in transient stability analysis—damping helps to stabilize the system. Damping must of course be considered in a dynamic stability study. Since the electrical power Pe depends upon the sine of angle δ, the swing equation is a non-linear second-order differential equation.

In a multimachine system a common system base must be chosen.

Consider the swing equations of two machines on a common system base.

Since the machine rotors swing together (coherently or in unison)

The two machines swinging coherently are thus reduced to a single machine as in Eq. (12.16). The equivalent inertia in Eq. (12.17) can be written as

The above results are easily extendable to any number of machines swinging coherently.