Whenever a fault occurs on a network such that a large current flows in one or more phases, a Short Circuit in Power System is said to have occurred.

When a short circuit occurs, a heavy current called short circuit current flows through the circuit. This can be beautifully illustrated by referring to Fig. 16.6 where a single phase generator of voltage V and internal impedance Zi is supplying to a load Z. Under normal conditions, the current in the circuit is limited by load impedance Z. However, if the load terminals get shorted due to any reason, the circuit impedance is reduced to a very low value ; being Zi in this case. As Zi is very small, therefore, a large current flows through the circuit. This is called Short Circuit Current. It is worthwhile to make a distinction between a short circuit and an overload.

When a Short Circuit in Power System occurs, the voltage at fault point is reduced to zero and current of abnormally high magnitude flows through the network to the point of fault. On the other hand, an overload means that loads greater than the designed values have Fig. 16.6 been imposed on the system. Under such conditions, the voltage at the overload point may be low, but not zero. The under voltage conditions may extend for some distance beyond the overload point into the remainder of the system. The currents in the overloaded equipment are high but are substantially lower than that in the case of a Short Circuit in Power System. 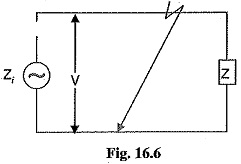 1. Causes of short-circuit: A short circuit in the power system is the result of some kind of abnormal conditions in the system. It may be caused due to internal and/or external effects.

Due to above deterimental effects of Short Circuit in Power System, it is desirable and necessary to disconnect the faulty section and restore normal voltage and current conditions as quickly as possible.

Most of the failures on the power system lead to short-circuit fault and cause heavy current to flow in the system. The calculations of these short-circuit currents are important for the following reasons :

Faults in a Power System:

A fault occurs when two or more conductors that normally operate with a potential difference come in contact with each other. These faults may be caused by sudden failure of a piece of equipment, accidental damage or Short Circuit in Power System to overhead lines or by insulation failure resulting from lightning surges. Irrespective of the causes, the faults in a 3-phase system can be classified into two main categories viz.