The Duty Cycle of Traction Drives in trains is explained with the help of speed-, torque- and power-time diagrams (Fig. 10.6) which are drawn for travel between two consecutive stations on a levelled track. The train is accelerated at the maximum permissible torque, giving constant maximum acceleration. The power increases linearly with speed. At time t1 the base speed and the maximum allowable power is reached. Further acceleration occurs at constant power. Torque and acceleration decrease inversely with speed. At time t2 the drive torque equals the load torque and steady speed is reached.

The diagrams of Fig. 10.6 are drawn for a levelled track. When gradients are involved, they will be modified. When going up the gradient, the acceleration and free running speed will be low. While going down the gradient, the braking may be required both during acceleration and free running, and coasting may have to be avoided. During braking, the deceleration will be low, because a part of braking torque is utilized in balancing the gravitational pull due to the down gradient.

In case of suburban trains, the distance between stations can be so small that brakes may have to be applied even before the train is fully accelerated. In that case free running and coasting will be absent. When the distance is larger than this, either free running or coasting may be present. In high speed trains, coasting is avoided as it reduces the average speed.

An electric locomotive uses more than one motor. Each Duty Cycle of Traction Drives different set of axles and wheels. Due to wear and tear, the diameters of wheels become different after they have been in service for quite sometime. The linear speed of the locomotive and wheels will be the same. Therefore, the motor speeds will be different due to the difference in the diameters of the wheels driven by them. Consequently, the motors will not share the torque equally.

Figs. 10.7(a) and (b) show the torque sharing for separately excited dc and series dc motors when the locomotive uses two motors, which run at speeds N1 and N2 due to the difference in wheel diameters. Torque developed by two motors are shown as T1 and T2. When T2 becomes equal to the rated motor torque Tr, T1 is smaller than Tr. The total torque that the locomotive can develop without overloading any motor is only (T1 + Tr), which is less than the sum of rated motor torques 2Tr; Thus, unequal torque sharing virtually derates the torque capability of the locomotive. The derating is larger for separately excited motor than the series motor. In general, torque sharing will be more unequal for motors with low speed regulation. Note that this requirement is contrary to that for adhesive coefficient. As explained earlier, the adhesive coefficient has a larger value for a motor with low speed regulation. 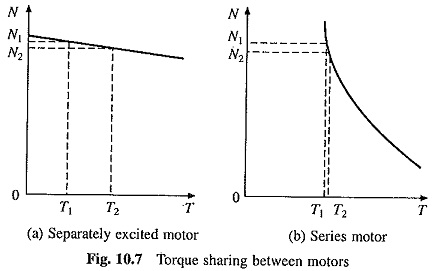 When motors are fed from different converters, equal torque sharing can be achieved by suitably controlling converter output voltages. But then the cost of drive goes up as two converters, each of 50% rating, will be more expensive than a single converter of full rating.