Considering the tremendous amount of waste heat generated in thermal power generation, it is advisable to save fuel by the simultaneous generation of electricity and steam (or hot water) for industrial use or space heating. Now called Cogeneration Power Plant, such systems have long been common, here and abroad.

Currently, there is renewed interest in these because of the overall increase in energy efficiencies which are claimed to be as high as 65%.

Cogeneration Power Plant is highly energy efficient and is particularly suitable for chemicals, paper, textiles, food, fertilizer and petroleum refining industries. Thus these industries can solve energy shortage problem in a big way. Further, they will not have to depend on the grid power which is not so reliable. Of course they can sell the extra power to the government for use in deficient areas. They may also sell power to the neighboring industries, a concept called wheeling power. 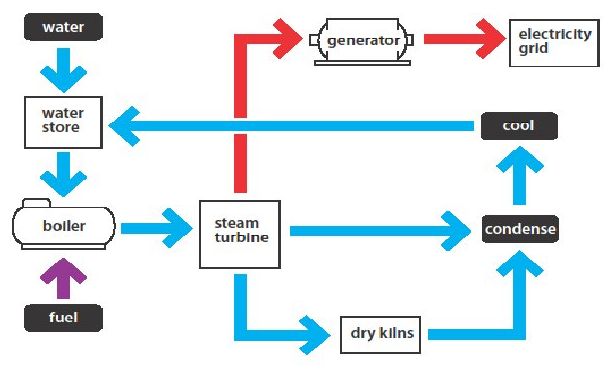 There are two possible ways of Cogeneration Power Plant of heat and electricity:

Coal-fired plants share environmental problems with some other types of fossil-fuel plants; these include “acid rain” and the “greenhouse” effect.