The Load Curve in Power Plant showing the variation of load on the power station with respect to (wet) time is known as a load curve.

The load on a power station is never constant; it varies from time to time. These load variations during the whole day (i.e., 24 hours) are recorded half-hourly or hourly and are plotted against time on the graph. The curve thus obtained is known as daily load curve as it shows the variations of load cart.. time during the day. Fig. 3.2. shows a typical daily Load Curve in Power Plant. It is clear that load on the power station is varying, being maximum at 6 P.M. in this case. It may be seen that load curve indicates at a glance the general character of the load that is being imposed on the plant. Such a clear representation cannot be obtained from tabulated figures. 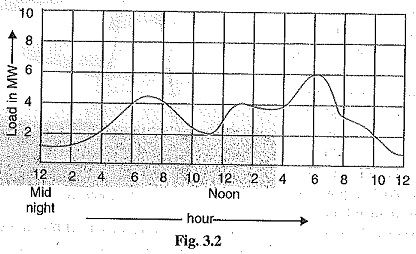 1.The daily load curve shows the variations of load on the power station during different hours of the day.

3.The highest point on the daily load curve represents the maximum demand on the station on that day.

4.The area under the daily load curve divided by the total number of hours gives the average load on the station in the day.

5.The ratio of the area under the load curve to the total area of rectangle in which is contained gives the load factor.

6.The load curve helps in selecting the size and number of generating units.

7.The load curve helps in preparing the operation schedule of the station.