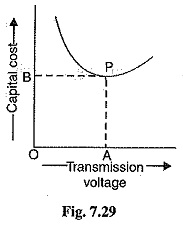 The present day trend is to follow certain empirical formulae for find­ing the economical transmission voltage. Thus, according to American practice, the economic voltage between lines in a 3-phase a.c. system is

It may be noted here that in the above formula, power to be transmitted and distance of transmis­sion line have been taken into account. It is because both these factors influence the economic voltage of a transmission line. This can be easily explained. If the distance of transmission line is increased, the cost of terminal apparatus is decreased, resulting in higher economic transmission voltages. Also if power to be transmitted in large, large generating and transforming units can be employed. This reduces the cost per kW of the terminal station equipment.