The method can be based on the phase margin in which the controller is designed to provide a minimum phase margin. The design makes use of Bode plots. The ratio of time constants can be decided depending upon the phase margin required, which directly influences the damping. Therefore this method has an advantage over the previous one. As the damping factor increases the phase margin also increases. Therefore a clear dependence of these quantities and the effect of the ratio of time constants on the time response of the system is clearly brought out in the following, so that a proper design of the controller to give the desired performance can be made.

The same example as above is taken here also. The plant has a transfer function

The zeros of Gc(s) are the same as the dominant poles of Gp(s), so that they compensate the large time constants of the plant. The open loop transfer function is

The design based on magnitude optimum gave a controller having its inte­grative time constant equal to twice the uncompensated time constant of the plant, i.e., T0 = 2Te.

To design a controller based on phase margin the ratio of time constants is T0/Te is assumed to be K0. Using this ratio we have

In the frequency domain

The phase margin of the system can be obtained as

If the phase angle of the transfer function is φc, the the phase margin is 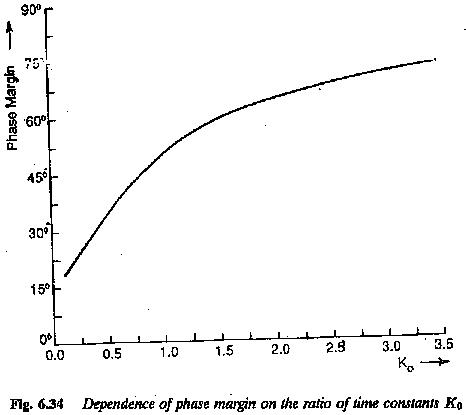 The time domain specifications can now be related to the value of K0. These are the initial rise time, the maximum overshoot and the area under the first overshoot. The time response of the second order system for different values of K0 is shown in Fig. 6.35. The time response can be given by equation

The damping of the response increases with the value of K0. From the time response it can be seen that the proper value of K0 lies between one and four. For a value of K0 < 1.5 the tr < 4Te. The settling time can also be determined.

The maximum overshoot as a function of K0 can be determined and is depicted in Fig. 6.35(b). From the figure it is clear that overshoot decreases as the value of K0 increases. For K0 = 1.5, % overshoot = 8.5.

The area under the first overshoot as a function of K0 is also shown in Fig. 6.35(c). This is obtained by evaluating the integral. 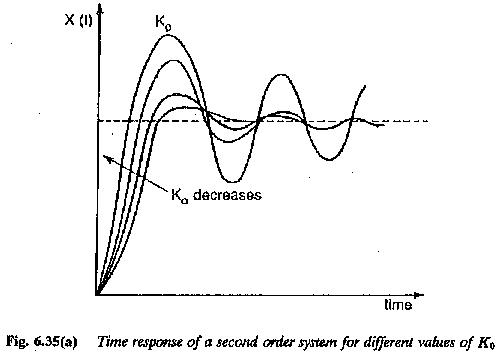 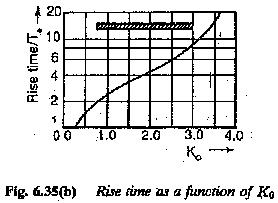 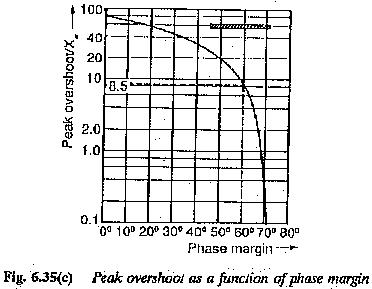 The integration results in

T1/Te drawn as a function of phase margin is depicted in Fig. 6.35(d). The first overshoot dominated for the thick portion of the characteristic, 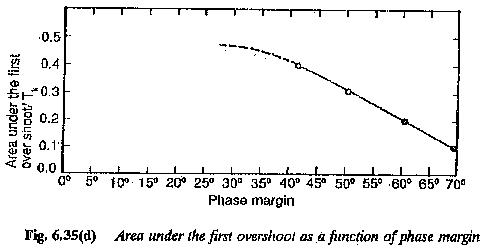 The value of T0 can be chosen freely. Its effect on the magnitude plot of frequency response is similar to the effect gain. Thus change in value of T0 can be regarded as change in gain and the magnitude plot moves along ordinate. For smaller values of T0 it moves upward, increasing the value of gain cross-over frequency. The typical amplitude plots of a PI controller used to improve the performance of the plant having one large time constant, are shown in Fig. 6.36. It, clearly shows that the cross-over frequency depends upon T0 and hence K0. The relationship between ωc/ω0 and K0 is shown in Fig. 6.37. 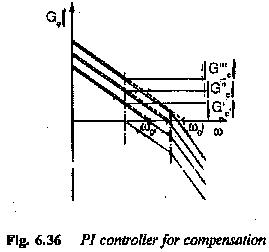 The function should have a magnitude plot such that it has a slope of 20 db/decade up to the corner frequency 1/Te, where Te is the uncompensated time con­stant of the plant, and later it must have a slope of 40 db/decade so that the compensations of the two time constants is effective. 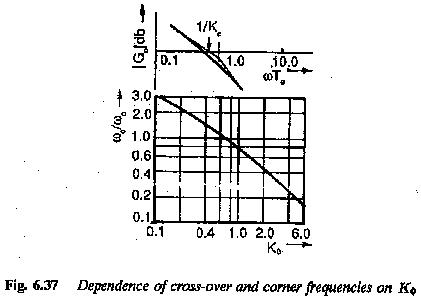 Therefore, while designing a controller its amplitude plot may be freely chosen to have the necessary gain cross-over frequency. This can be achieved by shifting the amplitude plots along the y-axis until the gain cross-over oc­curs above the required phase angle (decided by phase margin). The phase angle characteristic is the resultant of the phase angle characteristics of the plant and the controller. The proper value of T0 is arrived at. The resul­tant open loop transfer function of the modified system can be determined. There will be a small difference between the value of K0 determined using the asymptotic plots and the actual calculation. If the transfer function of the plant has a gain of K, the controller will have a integration time KT0.

1.The transfer function of the plant to be modified is given by

Te is the sum of several parasitic time constants of the system.

2.The controller transfer function is chosen to compensate all Tpn. There­fore with respect to these time constants it has a form 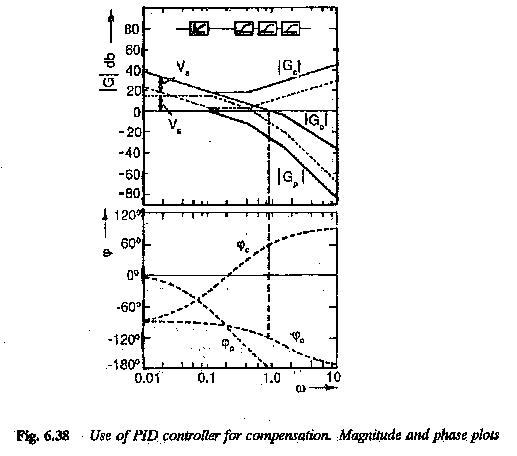 has the specified phase margin. The closed loop transfer function has a time response of the second order system, having a damping ratio of √K0/2.