The design of a controller based on the principle Magnitude Optimum that it allows all the fre­quencies to pass through in a similar way for a simple system is shown in Fig. 6.31. 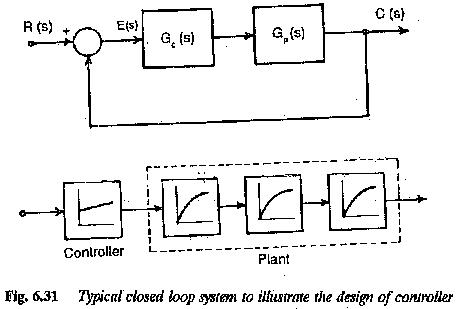 The system has an input R(s) and output C(s). The closed loop transfer function

Vs is the gain of the plant

These parasitic time constants of the control system are introduced by the non-ideal nature of the devices and the elements used for harmonic elimination and smoothing. The value of Te is of the order of 2 to 5 ms and it is very much smaller than the least of the large time constants.

An optimised controller can be obtained on the principle described only if the large time constants are compensated and T0 and Te only effect the transient behaviour. Hence the rules of optimization can be stated as

the controller must have a transfer function

Using the above rules of optimization

If the controller suits the plant with respect to its structure as well as param­eters, typical transfer functions are given both for open and closed loops.

The plant transfer function is

The controller transfer function is

The open loop transfer function is

Making Ti1 = T1,Ti2 = T2 so that controller completely compensates both the large time constants of the plant we have

must be unity to satisfy the magnitude optimum. This happens only if

The compensation of the two large time constants of the plant by the con­troller is depicted in Fig. 6.32. The Bode plot of the open loop transfer func­tion corresponds to a first order system with integration. The gain cross-over frequency

The phase margin at gain cross-over is 65°. 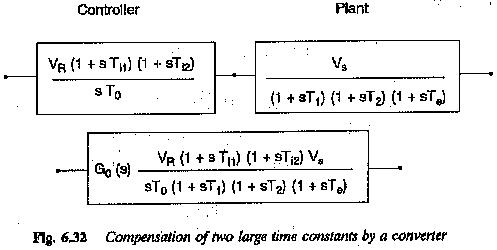 The time response of the modified system with the controller can now be determined. The closed loop transfer function

1.The rise time tr is the time taken by the output to attain the input value for the first time 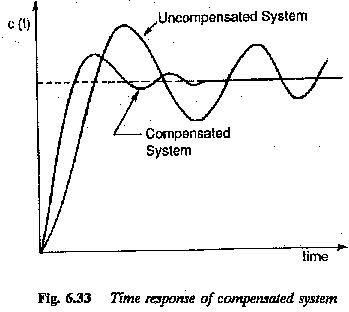 2.The settling time is determined using the fact that it takes several cycles for the output quantity to reach the steady-state value

3.The overshoot is determined using the condition

The resulting system will have a damping factor 0.707 as decided by the ratio of time constants. This damping is rather high and may not be suitable for all applications.