Relative Stability from the Nyquist Plot:

The nearness of the polar plot, which reveals the relative stability of the system, is characterised by phase margin and gain margin. These definitions are used with simple shapes of locus which cross the x-axis only once. For complex shapes these are ambigious. 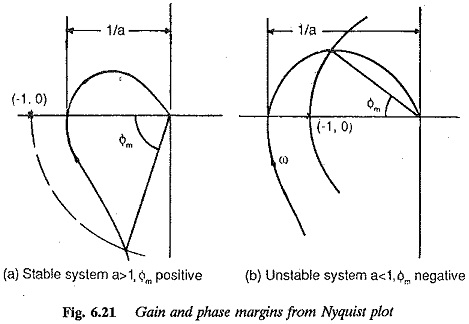 The gain margin of first and second order systems is infinite as their polar plots do not cross the x-axis. Therefore, theoretically speaking they cannot become unstable. In practice these systems may have small time lags which are neglected in the derivation of transfer functions. When these are taken into consideration the systems may become unstable. However, increase of gain constant brings the locus nearer to the point (-1, 0) making the transient response more oscillatory. This is depicted for a second order system in Fig. 6.20 which gives the Nyquist locus and transient response of the system for different values of gain constant.

where Φ0 is the phase angle of the open loop transfer function when its magnitude is unity. The frequency at which the magnitude is unity is called the gain cross over frequency. The phase margin is the additional phase lag at the gain cross-over frequency to make the locus pass through the point (-1, 0), so that the system is on the verge of instability. From the definition, it is clear that the phase margin (Φm) is positive for stable systems. As it approaches zero, the system becomes less stable and its transient response becomes oscillatory. When Φm is zero the system is on the verge of instability. The value of Φm is negative (< 0) for unstable systems. 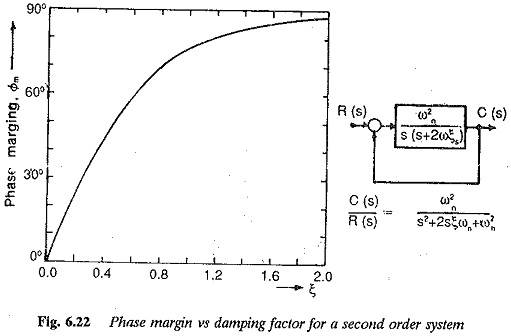 These margins can therefore be used as design criteria. They offer a means of adjusting the gain and time constants of the system to obtain the required behaviour. The design of various controllers to improve the stability perfor­mance is based on providing specified values of phase and gain margins.

The above discussion is applicable to systems which are absolutely stable. It is necessary to note that the stability condition for non-minimum phase functions is satisfied only if the Nyquist plot encircles (-1, 0). For these systems therefore, the phase and gain margins are negative.