A block of series regulation using simple Constant Current Limiting Circuit is shown in the Fig. 2.119. It is also called short circuit protection circuit as it provides protection against short circuiting. The resistance R4 is added in series with the pass transistor Q1 and the load which is called current sensing resistor. 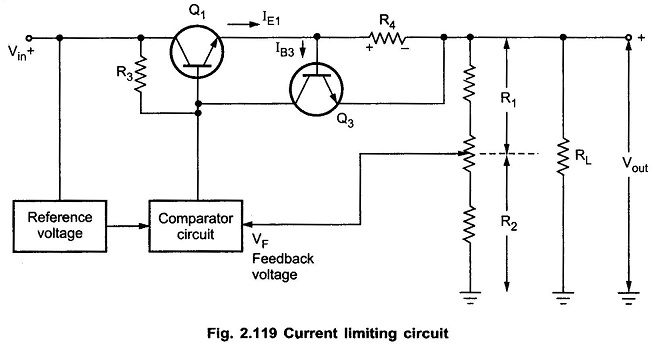 When current increases due to over loading or short circuit conditions then drop across R4 increases more than 0.6 V. The 0.6 V is sufficient to turn on the transistor Q3. The collector current of Q3 flows through R3 and decreases the base voltage of Q1. This decreases the load voltage. This decrease in output voltage prevents the large load current.

Let us study the variation of load current against load voltage with simple Current Limiting Circuit. 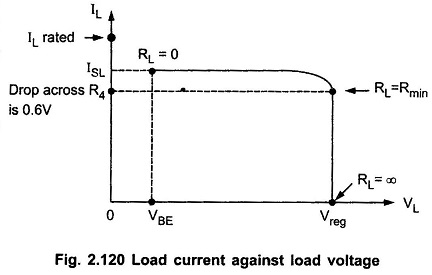 In such a case, drop across R4 is equal to VBE to turn on the transistor Q3.

The minimum load resistance Rmin below which regulation is lost can be calculated as,

The practical value of Rmin will be slightly greater or less than this.

The disadvantage of constant current limiting is relatively large power dissipation in the series pass transistor when load terminals are shorted. Thus a large power rating transistor is required.

The power dissipation in the series pass transistor is given by,

The circuit which is used in practice which eliminates the disadvantage of simple current limiting is called foldback Constant Current Limiting Circuit.

Such protection is provided in IC 723 with the help of resistance RSC connected to CL (current limiting) pin. The drop across RSC is applied across pins CL and CS. When this voltage becomes more than 0.6 V, it turns on internal current limiting transistor Q3 . The calculations of RSC for IC 723 are discussed earlier while discussing the applications of IC 723.