In order to optimise the characteristics of the system in terms of performance, handling capacity and cost, the relevant sub systems can be combined together. Analog data is generally acquired and converted into digital form for the purpose of processing, transmission, display and storage.

Processing may consist of a large variety of operations, ranging from simple comparison to complicated mathematical manipulations. It can be for such purposes as collecting information (averages, statistics), converting the data into a useful form (e.g., calculations of efficiency of motor speed, torque and power input developed), using data for controlling a process, performing repeated calculations to separate signals buried in the noise, generating information for display, and various other purposes.

The data may be displayed on a digital panel or on a CRT. The same be stored temporarily (for immediate use) or permanently for ready reference later.

Data acquisition generally relates to the process of collecting the input data in digital form as rapidly, accurately, and economically as necessary. The basic instrumentation used may be a DPM with digital outputs, a shaft digitiser, or a sophisticated high speed resolution device.

To match the input requirements with the output of the sensor, some form of scaling and offsetting is necessary, and this is achieved by the use of amplifier/ attenuators.

For converting analog information from more than one source, either additional transducers or multiplexers are employed. To increase the speed with which information is accurately converted, sample-hold circuits are used. (In some cases, for analog signals with extra-wide range, logarithmic con­version is used.)

A schematic block diagram of a General Data Acquisition System (DAS) is shown in Fig. 17.1. 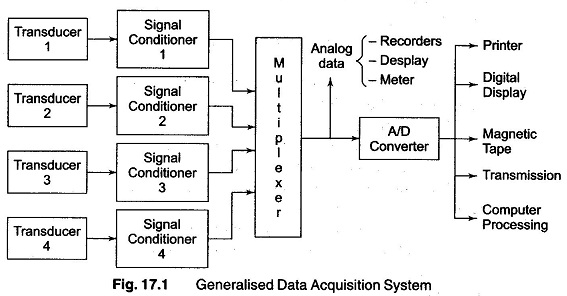 The characteristics of the data acquisition system, depend on both the prop­erties of the analog data and on the processing carried out.

Based on the environment, a broad classification divides the DAS into two categories.

The former category may include, among other, laboratory instrument applications, test systems for collecting long term drift information on zeners, high calibration test instruments, and routine measurements in research, as mass spectrometers and lock-in amplifiers. In these, the systems are designed to perform tasks oriented more towards making sensitive measurements than to problems of protecting the integrity of analog data.

Most of these hostile measurement conditions require devices capable of a wide range of temperature operations, excellent shielding, redundant paths for critical measurements and considerable processing of the digital data.

On the other hand, laboratory measurements are performed over a narrow temperature range with much less electrical noise, employing high sensitivity and precision devices for higher accuracies and resolution.

The important factors that decide the configuration and sub systems of the data acquisition system are as follows.

The various general configurations include the following.