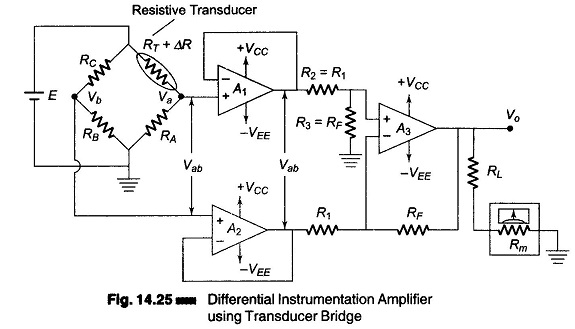 In this circuit a resistive transducer (whose resistance changes as a function of some physical energy) is connected to one arm of the bridge.

The condition for bridge balance is Vb = Va, i.e. the bridge is balanced when Vb = Va, or when

Therefore, applying the voltage divider rule we have

The output voltage across the bridge terminal is Vab given by Vab = Va – Vb.

We shall now consider some important applications of instrumentation amplifiers using resistance types transducers. In these transducers, the resistance of the transducer changes as a function of some physical quantity. Commonly used resistance transducers are thermisistors, photoconductor cells, and strain gauges.

The Thermistor is a relative passive type of temperature resistance transducer. They are basically semiconductors.

Since it is a thermally sensitive resistor, it has a high temperature coef­ficient of resistance and is therefore well suited for temperature measurement and control.

If in the bridge circuit of Fig. 14.25 the transducer used is a thermistor, the circuit can thus be used as a temperature indicator. The output meter is then calibrated in °C or °F. The bridge is balanced initially at a desired reference condition. As the temperature varies, the resistance of the thermistor also changes, unbalancing the bridge, which in turn produces a meter deflection at the output. By selecting the appropriate gain for the Differential Instrumentation Amplifier Transducer Bridge, the meter can be calibrated to read a desired temperature. In this circuit, the meter movement (deflection) depends on the amount of unbalance in the bridge, which is caused by a change in the value of thermistor resistance ΔR. The change ΔR for the thermistor can be determined as follows.

If the meter in this circuit is replaced by a relay, and if the output of the Differential Instrumentation Amplifier Transducer Bridge drives the relay that controls the current in the heat-generating circuit, a temperature controller can be formed. A prop­erly designed circuit should energize a relay when the temperature of the ther­mistor drops below a desired value, causing the heater unit to turn on.

If in the bridge circuit of Fig. 14.25, the transducer is a photocell, this circuit can be used as a light intensity meter. Initially the bridge is balanced for the dark condition, therefore when exposed to light the bridge becomes unbalanced, to a degree depending upon the intensity of light. This unbalance causes the meter to deflect. To measure the change in light intensity, the meter is cali­brated in terms of Lux or Lumen.

Figure 14.25 can be converted into a simple analog weight scale by connecting strain gauges in the bridge circuit. These strain gauges are connected in all the four arms of the bridge, as shown in Fig. 14.26. The strain gauge elements are mounted on a base of the specially made weight platform, on which an external force or weight is placed. One pair of strain gauge elements in opposite arms elongates, (i.e. RT1 and RT3 both increases in resistance) while the other pair compresses (RT2 and RT4 both decreases in resistance), and vice-versa.

The bridge is balanced when no external force or weight is applied, i.e. RTI = RT2 = RT3 = RT4 = R, and the output voltage of the weight scale is zero. 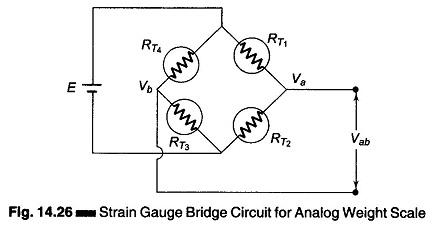 Suppose a weight is placed on the scale platform and RT1 and RT3 increases in resistance. Then RT2 and RT4 decrease in resistance by the same value AR and the bridge is unbalanced, thereby giving an unbalanced output voltage. This unbalanced voltage Vab is given by

The Differential Instrumentation Amplifier Transducer Bridge then amplifies the voltage Vab, giv­ing a deflection on the meter movement. As the gain of the amplifier is (+ RF/R1), the output voltage Vo is given by

The gain of the amplifier is selected depending on the sensitivity of the strain gauge and on the full scale deflection requirements of the meter. The meter can be then calibrated in grams or kilograms.

For better accuracy and resolution, a micro based digital weight scale may be constructed. However, such a scale is much more complex and expensive then the analog scale.