Strain gauges work on the principle that the resistance of a conductor or semiconductor changes when strained. This can be used for the measurement of displacement, force and pressure.

The resistivity of materials changes with changes in temperature. This property can be used for the measurement of temperature.

A resistive potentiometer (pot) consists of a resistance element provided with a sliding contact, called a wiper. The motion of the sliding contact may be translatory or rotational. Some have a combination of both, with resistive elements in the form of a helix, as shown in Fig. 13.1(c). They are known as helipots. 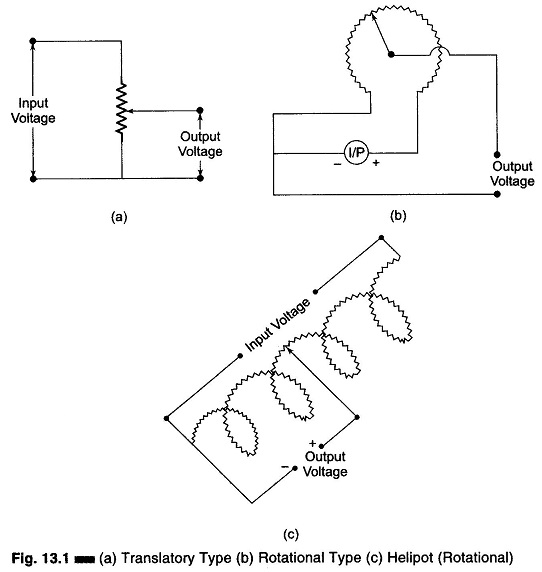 Helical resistive elements are multi turn rotational devices which can be used for the measurement of either translatory or rotational motion. A potentiometer is a passive transducer since it requires an external power source for its operation.

Measurement in the resistive type of transducer is based on the fact that a change in pressure results in a resistance change in the sensing elements. Resistance pressure transducers are of two main types. First, the electromechanical resistance transducer, in which a change of pressure, stress, position, displacement or other mechanical variation is applied to a variable The other resistance transducer is the strain gauge, where the stress acts directly on the resistance. It is very commonly used for stress and displacement measurement in instrumentation. 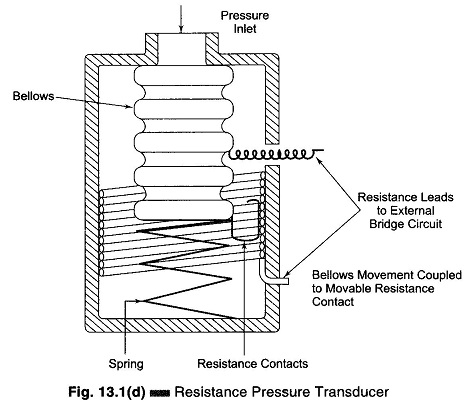 In the general case of pressure measurement, the sensitive resistance element may take other forms, depending on the mechanical arrangement on which the pressure is caused to act.

Figure 13.1(d) and (e) show two ways by which the pressure acts to influence the sensitive resistance element, i.e. by which pressure varies the resistance They are the bellow type, and the diaphragm type. (Yet another is the Bourdon tube of pressure gauge). 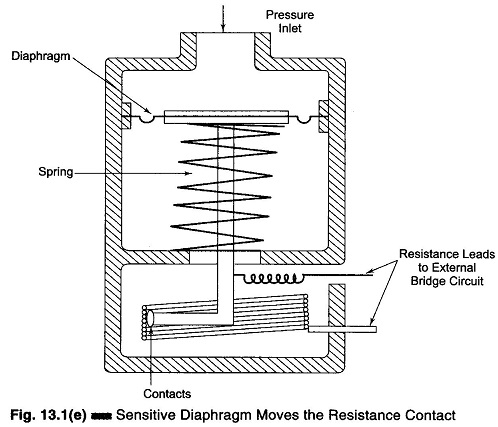 In each of these cases, the element moved by the pressure change is made to cause a change in resistance. This resistance change can be made part of a bridge circuit and then taken as either ac or dc output signal to determine the pressure indication.