What is an Inductive Transducer?:

An inductive electromechanical transducer is a device that converts physical motion (position change) into a change in inductance.

Transducers of the variable inductance type work upon one of the following principles.

Inductive Transducers are mainly used for the measurement of displacement. The displacement to be measured is arranged to cause variation in any of three variables

For example, let us consider the case of a general inductive transducer. The Inductive Transducer has N turns and a reluctance R. When a current i is passed through it, the flux is

If the current varies very rapidly,

But emf induced in the coil is given by

Also the self inductance is given by

Therefore, the output from an inductive transducer can be in the form of either a change in voltage or a change in inductance.

Change in Self Inductance with Numbers of Turns:

The output may be caused by a change in the number of turns. Figures 13.14(a) and (b) are transducers used for, the measurement of displacement of linear and angular movement respectively.

Figure 13.14(a) is an air cored transducer for measurement of linear dis­placement.

Figure 13.14(b) is an iron cored coil used for the measurement of angular displacement.

In both cases, as the number of turns are changed, the self inductance and the output also changes.

Transducer Working on the Principle of Change in Self Inductance with Change in Permeability: 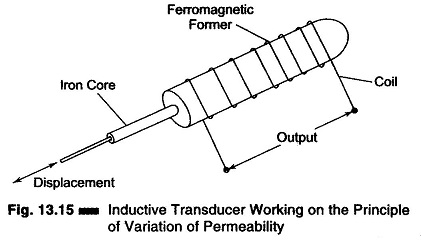 A transducer of the variable type consists of a coil wound on a ferromagnetic core. The displacement which is to be measured is applied to a ferromagnetic target. The target does not have any physical contact with the core on which it is mounted. The core and the target are separated by an air gap, as shown in Fig. 13.16(a) 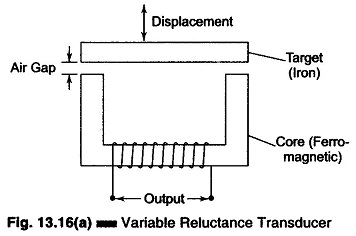 The self inductance of the coil is given by

The reluctance of the iron part is negligible compared to that of the air gap.

But reluctance of the air gap is given by

Rg is proportional to lg, as μo and Ag are constants.

Since it is the displacement which changes the length of the air gap, the self inductance is a function of displacement, albeit a non-linear one. 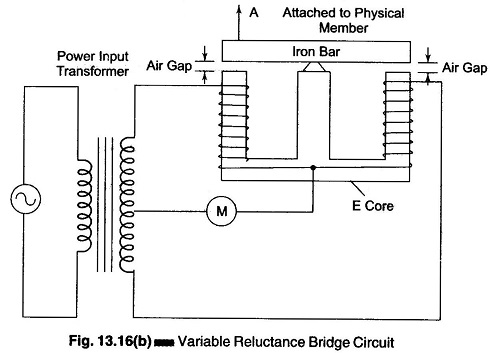 The moving member is attached to one end of the iron bar and causes the bar to wobble back and forth, thereby varying the size of each air gap.

The increase and decrease of the inductance with varying air gap sizes is non-linear, and so is the output. Also, the flux density within the air gaps is easily affected by external fields.