Capacitive Pressure Transducer Working Principle – A linear change in capacitance with changes in the physical position of the moving element may be used to provide an electrical indication of the element’s position.

The capacitance is given by

From this equation, it is seen that capacitance increases (i) if the effective area of the plate is increased, and (ii) if the material has a high dielectric con-stmt.

The capacitance is reduced if the spacing between the plates is increased. Transducers which make use of these three methods of varying capacitance have been developed.

With proper calibration, each type yields a high degree of accuracy. Stray magnetic and capacitive effects may cause errors in the measurement produced, which can be avoided by proper shielding. Some capacitive dielectrics are tem­perature sensitive, so temperature variations should be minimized for accurate measurements.

The rotor is mechanically coupled to the member under test. As the member moves, the rotor changes its position relative to the stator, thereby changing the effective area between the plates. A transducer of this type is shown in Fig. 13.28. 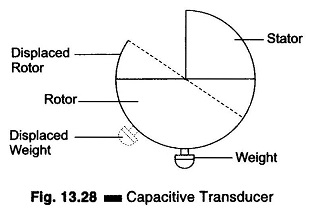 Such a device is used to detect the amount of roll in an aircraft. As the aircraft rolls to the left, the plates moves to the relative position shown by dashed lines in Fig. 13.28 and the capacitance decreases by an amount proportional to the degree of roll. Similarly to the right. In this case the stator, securely attached to the aircraft, is the moving element. The weight on the rotor keeps its position fixed with reference to the surface of the earth, but the relative position of the plates changes and this is the factor that determines the capacitance of the unit. 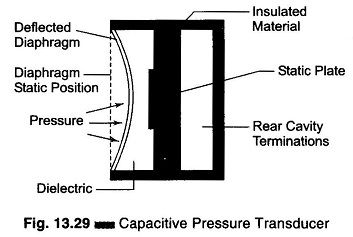 Figure 13.29 shows a transducer that makes use of the variation in capaci­tance resulting from a change in spacing between the plates. This particular transducer is designed to measure pressure (in vacuum).

Enclosed in an airtight container is a metallic diaphragm which moves to the left when pressure is applied to the chamber and to the right when vacuum is applied. This diaphragm is used as one plate of a variable capacitor. Its distance from the stationary plate to its left, as determined by the pressure applied to the unit, determines the capacitance between the two plates. The monitor indicates the pressure equivalent of the unit’s capacitance by measuring the capacitor’s reactance to the ac source voltage.

Changes in pressure may be easily detected by the variation of capacity between a fixed plate and another plate free to move as the pressure changes. The resulting variation follows the basic capacity formula.

The capacitive pressure transducer working principle, as in the capacitive microphone, is simple to construct and inexpensive to produce. It is particularly effective for HF variations.

However, when the varying capacitance is made part of an ac bridge to produce an ac output signal, the conditions for resistive and reactive balance generally require much care to be taken against unwanted signal pickup in the high impedance circuit, and also compensation for temperature changes. As a result, the receiving instrument for the capacitive sensor usually calls for more advanced and complex design than is needed for other transducers.