When a strain occurs in the member being measured, along the transverse axis of the gauge, it also affects the strain being measured parallel to the longitudinal axis. This introduces an error in the response of the gauge.

If the axis of the strain in a component is unknown, Strain Gauge Transducer Types may be used to determine the exact direction. The standard procedure is to place several gauges at a point on the member’s surface, with known angles between them. The magnitude of strain in each individual gauge is measured, and used in the geometrical determination of the strain in the member. Figure 13.7 shows a three-element strain gauge, called a Rossette gauge, in which the angle between any two longitudinal gauge axes is 45°. 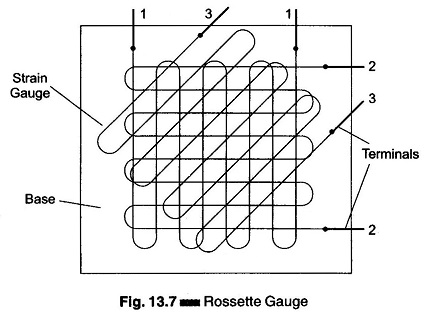 The 45° Rossette gauge is, in general, the most popular one. There are different shapes and sizes of Strain Gauge Transducer Types for various purposes.

Serving a similar, but not specialized, purpose are gauges with specially modified grid configurations, such as those shown in Figs. 13.8(a), (b) and (c). 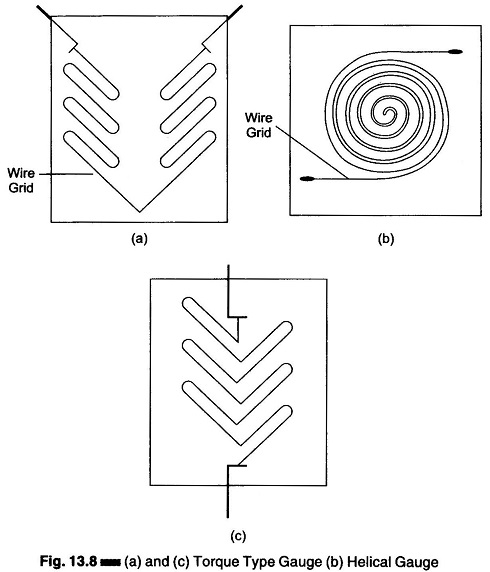 A measurement of this type would be useful at the cross-point of an X-shaped frame.

The latest in strain gauges is the etched foil strain gauge. This device uses the technique of PCB design. Its physical and electrical characteristics are superior to bonded wire strain gauges in almost every respect.

The size of strain gauges varies with application. They can be as small as 3 sq.mm. Usually they are larger, but not more than 2.5 mm long and 12.5 mm wide.

To obtain good results, it is desirable that a resistance wire strain gauge have the following characteristics.

This class of strain gauges is an extension of the resistance wire strain gauge. The strain is sensed with the help of a metal foil. The metals and alloys used for the foil and wire are nichrome, constantan (Ni + Cu), isoelastic (Ni + Cr + Mo), nickel and platinum.

Foil gauges have a much greater dissipation capacity than wire wound gauges, on account of their larger surface area for the same volume. For this reason, they can be used for a higher operating temperature range. Also, the large surface area of foil gauges leads to better bonding.

The advantage of foil type Strain Gauge Transducer Types is that they can be fabricated on a large scale, and in any shape. The foil can also be etched on a carrier.

Etched foil gauge construction consists of first bonding a layer of strain sensitive material to a thin sheet of paper or bakelite. The portion of the metal to be used as the wire element is covered with appropriate masking material, and an etching solution is applied to the unit. The solution removes that portion of the metal which is not masked, leaving the desired grid structure intact. 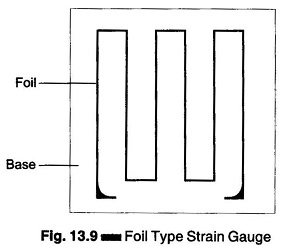 This method of construction enables etched foil strain gauges to be made thinner than comparable wire units, as shown in Fig. 13.9. This characteristics, together with a greater degree of flexibility, allows the etched foil to be mounted in more remote and restricted places and on a wide range of curved surfaces.

(The term hysteresis, as used in Strain Gauge Transducer Types, is defined as follows. If the resistance of a strain gauge is  measured with no strain applied, and the gauge is then stressed to its maximum usable resistance value, the measured resistance, after the stress is removed, differs from the original value. The inability of the gauge element to resume the exact physical form it had before being elongated, produces the difference in resistance. This effect is called hysteresis.)

To have a high sensitivity, a high value of gauge factor is desirable. A high gauge factor means relatively higher change in resistance, which can be easily measured with a good degree of accuracy.

A typical strain gauge consists of a strain material and leads that are placed in a protective box, as shown in Fig. 13.10. Semiconductor wafer or filaments which have a thickness of 0.05 mm are used. They are bonded on suitable insulating substrates, such as teflon.

Gold leads are generally used for making contacts. These strain gauges can be fabricated along with an IC Op Amp which can act as a pressure sensitive transducer. The large gauge factor is accompanied by a thermal rate of change of resistance approximately 50 times higher than that for resistive gauges. Hence, a semiconductor strain gauge is as stable as the metallic type, but has a much higher output.

Simple temperature compensation methods can be applied to semiconductor strain gauges, so that small values of strain, that is micro strains, can also be measured.