Strain Gauge Load Cell – The Load Cell is used to weigh extremely heavy loads. A length of bar, usually steel, is used as the active element. The weight of the load applies a particular stress to the bar. The amount of strain which results in the bar for different values of applied stress is determined, so that the strain may be used as a direct measure of the stress causing it.

The Strain Gauge Load Cell Working Principle shown in Fig. 13.30 is a good example of the use of strain gauges in weighing operations. 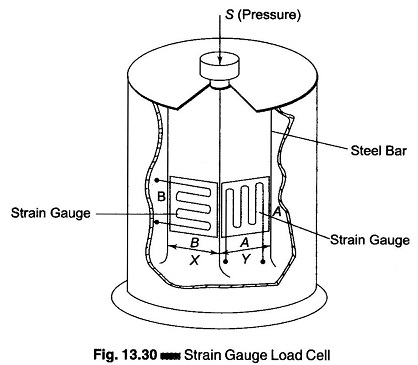 When these two gauges and the gauges on the two remaining sides of the steel are connected to form a bridge circuit, four times the sensitivity of a simple gauge bridge is obtained. This makes the load cell sensitive to very small values of applied stress, as well as to extremely heavy loads.