The Photoconductive Cell Construction and Working is illustrated in Fig. 20-10(a), and the graphic symbol is shown in Fig. 20-10(b). Light-sensitive material is arranged in the form of a long strip zigzagged across a disc-shaped base. The connecting terminals are fitted to the conducting material on each side of the strip; they are not at the ends of the strip. Thus, the light sensitive material is actually a short, wide strip between the two conductors. For added protection, a transparent plastic cover is usually included.

A typical photoconductive cell specification is shown in Fig. 20­-12. As well as maximum voltage and power dissipation, the cell dark resistance and the resistance at a 10 lx illumination is listed. Note the wide range of cell resistance at a 10 lx. The light wavelength that gives peak response (λP) is also given on the specification. Cell sensitivity is sometimes used, and this is simply the cell current for a given voltage and given level of illumination. 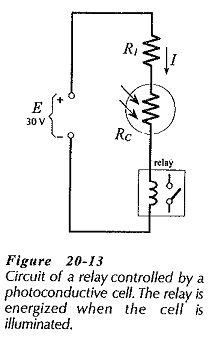 Photoconductive Cell Construction and Working employed to switch transistors on and off are shown in Fig. 20-14. When cell in Fig. 20-14(a) is dark, the cell resistance (RC) is high. Consequently, the transistor base is biased above its emitter voltage level, and Q1 is turned on. When the cell is illuminated, its resistance is reduced, and the lower cell resistance in series with R1 biases the transistor base below its emitter voltage level. Thus Q1 is turned off when the cell is illuminated.

In Fig. 20-14(b), Q1 is biased off when the cell is dark, because RC is high. When illuminated, the reduced cell resistance causes Q1 to be biased on.

Figure 20-15 shows a photoconductive cell used with an op-amp Schmitt trigger circuit. When the cell resistance is low (cell illuminated), the voltage across R1 is higher than the upper trigger point (UTP) for the Schmitt. Consequently, the op-amp output is tow (negative). The output switches to a high (positive) level when VR1 falls to the Schmitt circuit lower trigger point (LTP). This occurs when the cell illumination level falls, causing RC to rise. 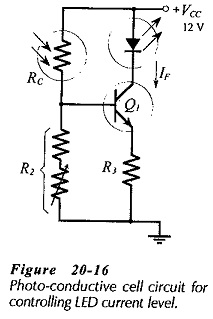 The circuit in Fig. 20-16 uses a photoconductive cell to control the current level in an LED. The LED current is low when the ambient light level is low, because the cell resistance is high. The LED current is increased as a result of the decreased resistance of RC when the ambient light level is high. This increased current gives greater LED brightness so that it can be easily seen.