The major disadvantage in La Mont boiler is the deposition of salt and sediment on the inner surface of the water tubes. It reduces the heat transfer and ultimately the generating capacity. The salt deposition will increase overheating. In Loeffler boiler, this problem is solved by preventing water from flowing through the boiler tubes. Most of the steam is generated outside the tubes. 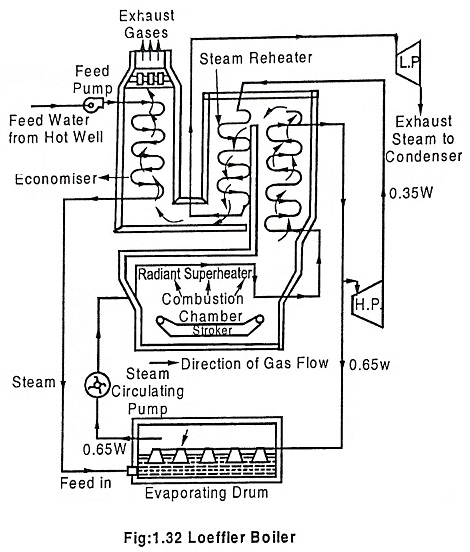 The steam circulating pump draws the saturated steam from the evaporator drum and is passed through the radiant superheater and then convective superheater.

Nearly 35% of steam coming out of the superheater is supplied to the H.P. steam turbine. After that, the steam from H.P turbine is passed through reheater before supplying to the L.P. turbines.

This boiler can carry higher salt concentration than any other type and is more compact than indirectly heated boilers having natural circulation.

The steam generating capacity of Loeffler boiler is 100 tons/hr and is operating at 140 bar.