Deviation from the Mean:

The deviations from the mean can be expressed as

The deviation may be positive or negative. The algebraic sum of all the deviations must be zero.

Average deviation may be expressed as 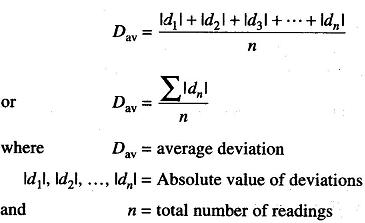 The standard deviation of an infinite number of data is the Square root of the sum of all the individual deviations squared, divided by the number of readings. It may be expressed as

The standard deviation is also known as root mean square deviation, and is the most important factor in the Statistical Analysis of Measurement Data. Reduction in this quantity effectively means improvement in measurement.

For small readings (n < 30), the denominator is frequently expressed as (n – 1) to obtain a more accurate value for the standard deviation.

Most manufacturers of measuring instruments specify accuracy within a certain % of a full scale reading. For example, the manufacturer of a certain voltmeter may specify the instrument to be accurate within ± 2% with full scale deflection. This specification is called the limiting error. This means that a full scale deflection reading is guaranteed to be within the limits of 2% of a perfectly accurate reading; however, with a reading less than full scale, the limiting error increases.