Delta Connected System – Figure 9.26 shows a balanced three-phase, three-wire, delta-connected system. This arrangement is referred to as mesh connection because it forms a closed circuit. It is also known as 3 Phase Delta Connection because the three branches in the circuit can also be arranged in the shape of delta (Δ). 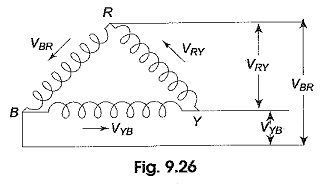 From the manner of interconnection of the three phases in the circuit, it may appear that the three phases are short-circuited among themselves. However, this is not the case. Since the system is balanced, the sum of the three voltages round the closed mesh is zero; consequently, no current can flow around the mesh when the terminals are open.

The arrows placed alongside the voltages, VRY, VYB and VBR, of the three phases indicate that the terminals R, Y and B are positive with respect to Y, B and R, respectively, during their respective positive half cycles. 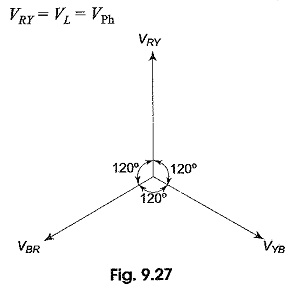 Since the system is balanced, all the phase voltages are equal, but displaced by 120° from one another as shown in the phasor diagram in Fig. 9.27. The phase sequence RYB is assumed.

The phasor addition of these currents is shown in Fig. 9.28(b). From the figure, 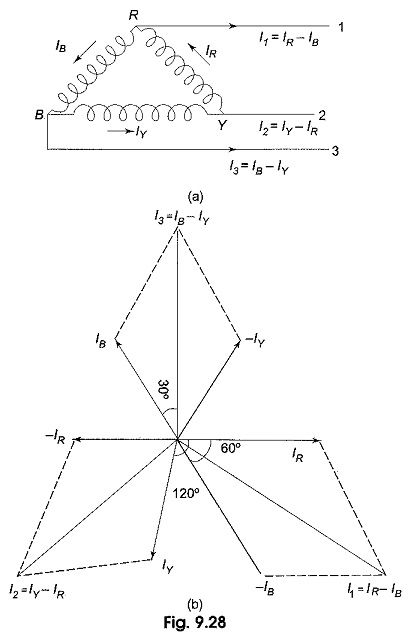 Power in the Delta-Connected System:

where Φ is the phase angle between phase voltage and phase current.

for a balanced system, whether star or delta, the expression for the total power is the same. 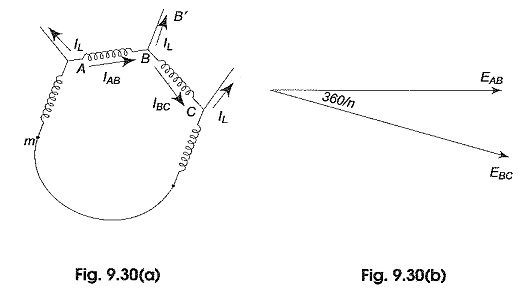 Let the current in line BB’ be IL.. This is same in all the remaining lines of the n-phase system. IAB, IBC are the phase currents in AB and BC phases respectively. The vector addition of the line current is shown in Fig. 9.30(c). It is evident from the Fig. 9.30(b) that the line and phase voltages are equal. 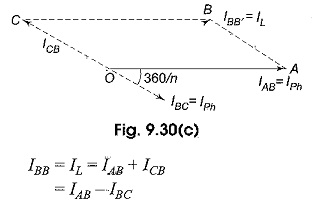 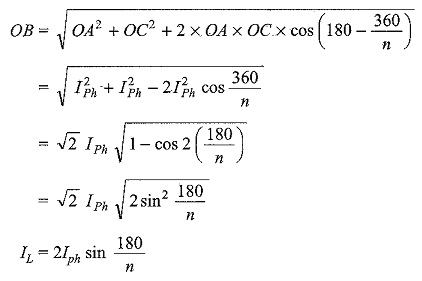 The above equation is a general equation for the line current n a balanced n-phase mesh system.