An electromagnetic torque is produced by the interaction of the two magnetic fields. Under the influence of the torque, one of the coils (which is movable) moves on a calibrated scale against the action of a spring. The instantaneous torque produced by electromagnetic action is proportional to the product of the instantaneous values of the currents in the two coils. The small current in the pressure coil is equal to the input voltage divided by the impedance of the pressure coil. The inertia of the moving system does not permit it to follow the instantaneous fluctuations in torque.

The wattmeter deflection is therefore, proportional to the average power (VI cos Φ) delivered to the circuit. Sometimes, a wattmeter connected in the circuit to measure power gives downscale reading or backward deflection. This is due to improper connection of the current coil and pressure coil. 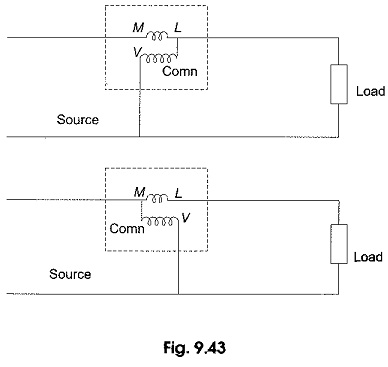