In the classical Ward Leonard Drive Transfer Function, the dc drive motor having constant excitation is supplied from a variable voltage generator, as shown in Fig. 6.9. The generator is driven at constant speed. The field current of the dc generator is varied by varying the field voltage to have variable voltage at the terminals, which is ultimately fed to the motor. A transfer function relating the speed of the motor and generator field voltage is required. 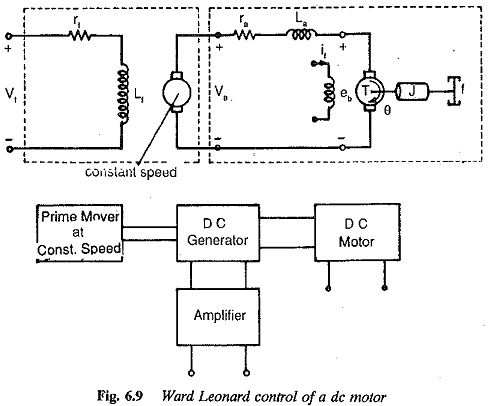 The system equations are

where Ka is a constant which includes the constancy of generator speed and the proportionality constant between field current and air gap flux. As usual the effects of saturation are neglected. Eliminating ifg from Eq. 6.30 we have

The transfer function of the armature controlled motor is

The block diagrams of a generator and a motor are shown in Fig. 6.10. 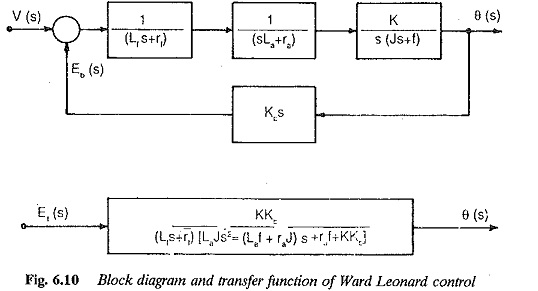 Using the schematic of Fig. 6.9 representing a Ward Leonard speed control system we have for the generator field circuit

which can be rearranged as

For the loop of armatures the circuit equation is given by

ea is the voltage induced in the armature of the generator and is given by Kgifg.

r′a and L′a include resistance and inductance of both generator and motor armatures respectively.

em is the back emf of the motor given by Kmω. Substituting in Eq. (6.37) and rearranging the terms we have

The torque balance equation gives the dynamics of the motor. It is

Equations 6.40 are the state equations of the system and given in matrix ro­tation as