The Subsystems of Thermal Power Plant are the auxiliary plants required for the plant for its proper operation and for the increase of their efficiency.

Some of the sub systems are as follows:

The appliances used to increase the efficiency of the boiler are known as boiler accessories.

The important boiler accessories are:

Feed pumps are used to deliver water to the boiler. It is essential to use a feed pump because the quantity of water supplied should meet amount of water evaporated and supplied to the engine. 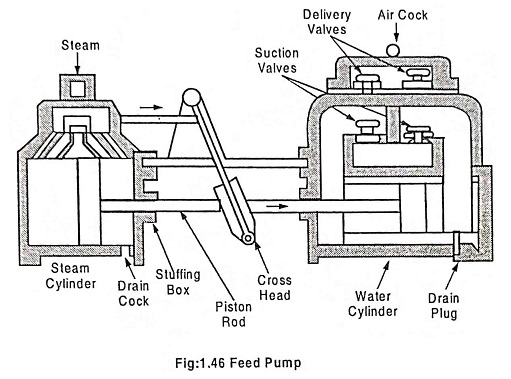 Basically two types of pump are in use

Reciprocating feed pump consists of a cylinder and a piston. The piston displaces water as it reciprocates inside the cylinder. The reciprocating pump may be of two types.

They are continuously run by steam from the same boiler to which water is to be fed.

Rotary feed pumps are of centrifugal types and are commonly run either by a small steam turbine or by electric motor.

The duplex feed pump is a double acting reciprocating feed pump. In this pump, there are two simple engine cylinders placed side by side. The pressure of steam acts directly on the piston to pump the water. Each pump has one steam cylinder and water cylinder.

It is a device in which the waste heat of the flue gases is utilized for heating feed water.

The uses of a economiser has many advantages 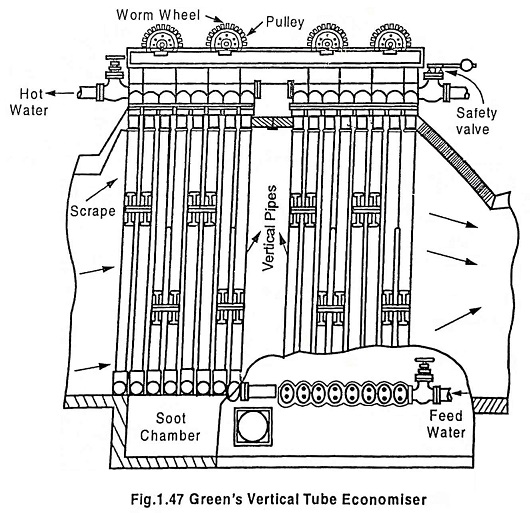 It consists of a large number of cast iron vertical tubes. These tubes are connected at the top and bottom by two horizontal pipes and are placed in the main flue between the boiler and the chimney. The water is pumped to the lower horizontal pipe and then flows through the vertical tubes. The water becomes heated by absorbing heat from the flue gas which passes over the tubes. The hot water enters the upper horizontal pipe and is fed to the boiler. To remove the deposits of soot from the surface of the tubes, scrapers are provided. These scrapers move up and down slowly by means of a chain passing over the pulleys to remove the soots.

In this subsystems of thermal power plant, air preheater is an auxiliary system that increase the temperature of air before it enters the furnance. It is generally placed after the economiser – i.e. in between economiser and chimney. 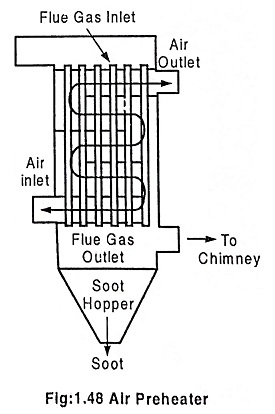 Preheated air accelerates the combustion and facilitates the burning of coal.

There are two types of air preheaters (a) recuperative and (b) regenerative.

In a recuperative air preheater, the heat from the flue gases is transferred to air through a metallic medium. In a regenerative air preheater, air and flue gases are made to pass alternatively through the matrix. When the hot gases pass through the matrix it transfers heat to the cold air. The preheating of air helps the burning of low grade fuel, thus permitting a reduction in excess air and thereby increasing the efficiency. The overall efficiency of the plant may be increased by 10% by its one.

In this subsystems of thermal power plant, the function of the super heater is to increase the temperature of the steam above its saturation point.

A superheater is located in the path of the hot furnace gases. Fig.1.49. shows a Sudgen’s superheater. 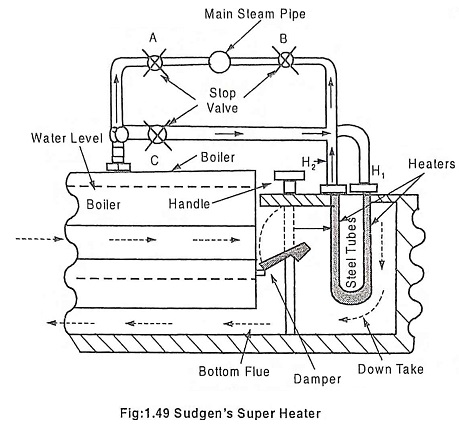 An injector is used to feed water into vertical and locomotive boilers using steam from the same boiler. It consists of three jets – steam jet, suction jet, combining and delivery jet. 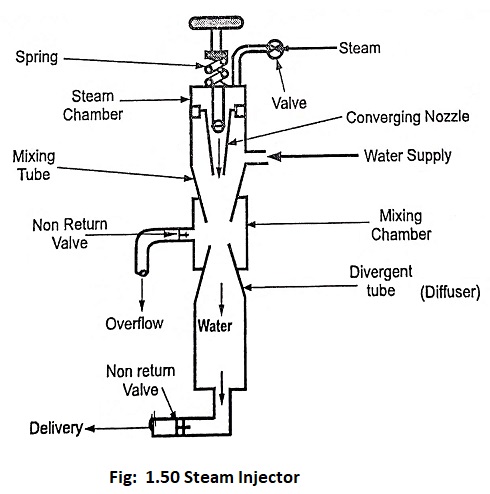 The steam expands in the steam nozzle where its pressure drops but its velocity increases. As the steam passes across space between steam and suction nozzles a vacuum is developed in the suction chamber. The water is drawn into the suction chamber from the feed tank. The high speed steam jet takes the water along with the steam into the combining and delivery jet.

Here the steam is condensed and mixed with the water. The delivery jet is so designed that a considerable amount of kinetic energy of the jet changes into pressure energy which is sufficient to force the water in the boiler. There will be no overflow when the steam and water are in proper ratio. For the injector to act properly there is a definite relation between the quantity of steam and water entering the injector.

It is the machine used to tip the coal from the wagon. The coal tipped is directly fed to conveyor belt which takes the coal to the coal mills.

Coal feeds in the coal mill are converted into pulverised form and they are fed to the boiler furnance.

It is the chamber in which fuel burns and fire blows.

It contains feed water for boiling.

It is used to release flue gas into the atmosphere.

Different types of Chimney are

It is used to cool the water and its height is about 140 meters.

It is used to increase the temperature of water at low pressure, in this way efficiency of system increases.

It is used to remove air from water which is entrapped in the water molecules. It is very important part because the entrapped air affects air drum badly.