Electromechanical Breakdown:When solid dielectrics are subjected to high electric fields, failure occurs due to electrostatic compressive forces which can exceed the mechanical compressive strength. If the thickness of the specimen is d0 and is compressed to a thickness d under an applied voltage V, then the electrically developed compressive stress is in equilibrium if

where Y is the Young’s modulus.

Substituting this in Eq. 4.2, the highest apparent electric stress before breakdown,

The above equation is only approximate as Y depends on the mechanical stress. Also when the material is subjected to high stresses the theory of elasticity does not hold good, and plastic deformation has to be considered.

Recently, this theory has been modified based on the concept of fracture mechanics. In the new mechanism, filamentary shaped cracks propogate through the dielectric material releasing both the electrostatic energy and the Electromechanical Breakdown strain energy stored in the material due to the applied electric field. This is analogous to the conventional mechanical crack propogation in brittle materials, where by the cracks propogate spontaneously, if the strain energy released is greater than that required to overcome the toughness of the material.

where, σ is the d.c. conductivity of the specimen.

Under a.c. fields, the heat generated

δ = loss angle of the dielectric material, and

The heat dissipated (WT) is given by

CV = specific heat of the specimen,

T = temperature of the specimen,

K = thermal conductivity of the specimen, and

t = time over which the heat is dissipated.

Equilibrium is reached when the heat generated (Wd.c. or Wa.c.) becomes equal to the heat dissipated (WT). In actual practice there is always some heat that is radiated out.

Breakdown occurs when Wd.c. or Wa.c. exceeds WT. The thermal instability condition is shown in Fig. 4.3. Here, the heat lost is shown by a straight line, while the heat generated at fields E1 and E2 are shown by separate curves. At field E2 breakdown occurs both at temperatures TA and TB. In the temperature region of TA and TB heat generated is less than the heat lost for the field E2, and hence the breakdown will not occur. 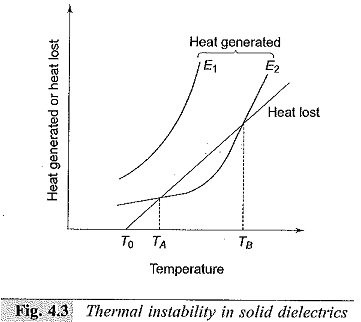 It can be seen from this table that since the power loss under a.c. fields is higher, the heat generation is also high, and hence the thermal breakdown stresses are lower under a.c. conditions than under d.c. conditions.