This is the Post Breakdown Phenomena in Gases which occurs after the actual breakdown has taken place and is of technical importance. Glow and arc discharges are the Post Breakdown Phenomena in Gases, and there are many devices that operate over these regions. In a Townsend discharge (see Fig. 2.20) the current increases gradually as a function of the applied voltage. Further to this point (B) only the current increases, and the discharge changes from the Townsend type to Glow type (BC). Further increase in current results in a very small reduction in voltage across the gap (CD) corresponding to the normal glow region.

If the current in the normal glow is increased such that the discharge covers the entire cathode surface, then it becomes abnormal glow. In a glow discharge, the voltage drop between the electrodes is substantially constant, ranging from 75 to 300 V over a current range of 1 mA to 100 mA depending on the type of the gas. The properties of the glow discharge are used in many practical applications, such as cold cathode gaseous voltage stabilized tubes (voltage regulation tubes or VR tubes), for rectification, as a relaxation oscillator, and as an amplifier.

If the current in the gap is increased to about 1 A or more, the voltage across the gap suddenly reduces to a few volts (20-50 V). The discharge becomes very luminous and noisy (region EG in Fig. 2.20). This phase is called the arc discharge and the current density over the cathode region increases to very high values of 103 to 107 A/cm2. Arcing is associated with high temperatures, ranging from 1000°C to several thousand degrees celsius. 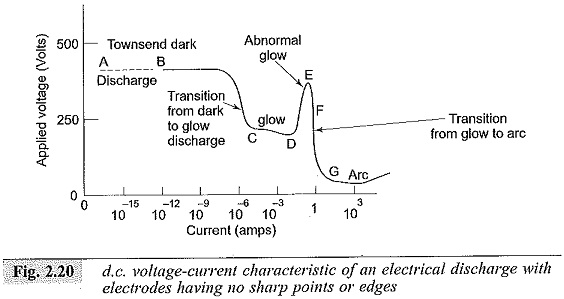 The discharge will contain a very high density of electrons and positive ions, called the arc plasma. The study of arcs is important in circuit breakers and other switch contacts. It is a convenient high temperature high intensity light source. It is used for welding and cutting of metals. It is the light source in lamps such as carbon arc lamp. High temperature plasmas are used for generation of electricity through magneto-hydro dynamic (MHD) or nuclear fusion processes.