It has been recognized that one process that gives high breakdown strength to a gas is the electron attachment in which free electrons get attached to neutral atoms or molecules to form negative ions. Since negative ions like positive ions are too massive to produce ionization due to collisions, attachment presents an effective way of removing electrons which otherwise would have led to current growth and breakdown at low voltage. The gases in which attachment plays an active role are called Breakdown in Electronegative Gases.

A simple gas of this type is oxygen. Other gases are sulphur hexafluoride, freon, carbon dioxide, and fluorocarbons. In these gases, ‘A’ is usually sulphur or carbon atom, and ‘B’ is oxygen atom or one of the halogen atoms or molecules.

With such gases, the Townsend current growth equation is modified to include ionization and attachment. An attachment coefficient (η) is defined, similar to α, as the number of attaching collisions made by one electron drifting one centimeter in the direction of the field. Under these conditions the current reaching the anode, can be written as

The Townsend breakdown criterion for attaching gases can also be deduced by equating the denominator in Eq. (2.17) to zero, i.e.

This shows that for α > η, Breakdown in Electronegative Gases is always possible irrespective of the values of α,η and γ. If on the other hand, η > α Eq. (2.18) approaches an asymptotic form with increasing value of d, and 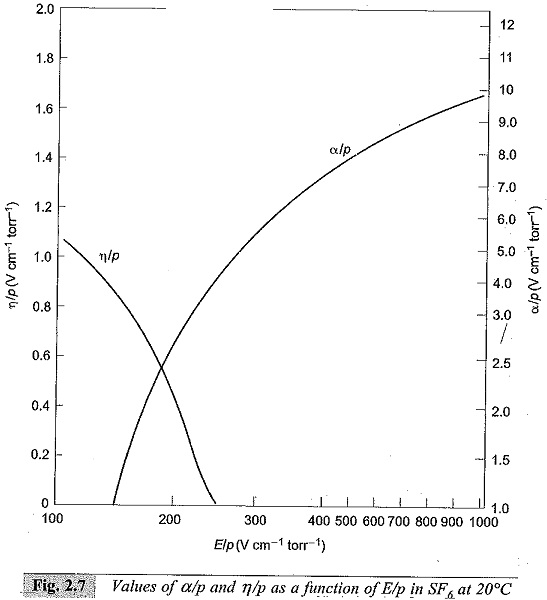