In the Principle of Vacuum Circuit Breaker, vacuum (degree of vacuum being in the range from 10-7 to 10-5 torr) is used as the arc quenching medium. Since vacuum offers the highest insulating strength, it has far superior arc quenching properties than any other medium. For example, when contacts of a breaker are opened in vacuum, the interruption occurs at first current zero with dielectric strength between the contacts building up at a rate thousands of times higher than that obtained with other circuit breakers.

The production of arc in a Principle of Vacuum Circuit Breaker and its extinction can be explained as follows : When the contacts of the breaker are opened in vacuum (10 7 to 10-5 torr), an arc is produced between the contacts by the ionisation of metal vapours of contacts. However, the arc is quickly extinguished because the metallic vapours, electrons and ions produced during arc rapidly condense on the surfaces of the circuit breaker contacts, resulting in quick recovery of dielectric strength. The reader may note the salient feature of vacuum as an arc quenching medium. As soon as the arc is produced in vacuum, it is quickly extinguished due to the fast rate of recovery of dielectric strength in vacuum.

Fig. 19.12 shows the parts of a typical vacuum circuit breaker. It consists of fixed contact, moving contact and arc shield mounted inside a vacuum chamber. The movable mem­ber is connected to the control mechanism bystainless steel bellows. This enables the permanent sealing of the vacuum chamber so as to eliminate the possibility of leak. A glass vessel or ceramic vessel is used as the outer insulating body. The arc shield prevents the deterioration of the internal dielectric strength by preventing metallic vapours falling on the inside surface of the outer insulating cover. 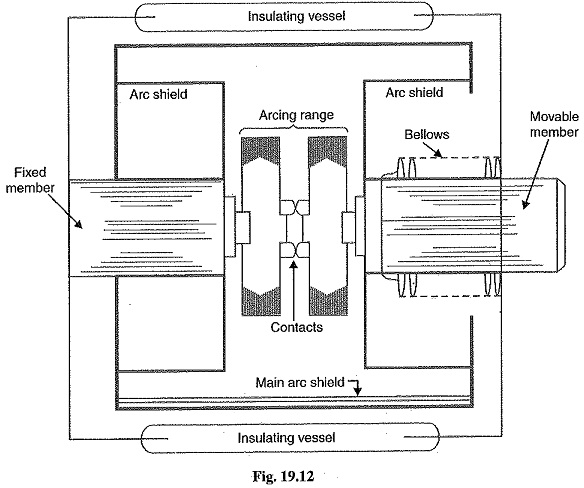 When the breaker operates, the moving contact separates from the fixed contact and an arc is struck between the contacts. The production of arc is due to the ionisation of metal ions and depends very much upon the material of contacts. The arc is quickly extinguished because the metal­lic vapours, electrons and ions produced during arc are diffused in a short time and seized by the surfaces of moving and fixed members and shields. Since vacuum has very fast rate of recovery of dielectric strength, the arc extinction in a vacuum breaker occurs with a short contact separation (say 0.625 cm)

Use of Vacuum Circuit Breaker:

For a country like India, where distances are quite large and accessibility to remote areas difficult, the installation of such outdoor, maintenance free circuit breakers should prove a definite advantage. Vacuum circuit breaker are being employed for outdoor applications ranging from 22 kV to 66 kV. Even with limited rating of say 60 to 100 MVA, they are suitable for a majority of applications in rural areas