High Voltage Test on Circuit Breaker and Isolators is covered, giving common characteristics for both. While these characteristics are directly relevant to the testing of circuit breakers, they are not much relevant as far as the testing of isolators are concerned since isolators are not used for interrupting high currents. At best, they interrupt small currents of the order of 0.5 A (for rated voltages of 420 kV and below) which may be the capacitive currents of bushings, busbars etc. In fact, the definition of an Isolator or a Disconnector as per IS: 9921 (Part I)-1981 is as follows:

An isolator or a disconnector is a mechanical switching device, which provides in the open position, an isolating distance in accordance with special requirements. An isolator is capable of opening and closing a circuit when either negligible current is broken or made or when no significant change in the voltage across the terminals of each of the poles of the isolator occurs. It is also capable or carrying currents under normal circuit conditions, and carrying for a specified time, currents under abnormal conditions such as those of a short circuit.

Thus, most of the discussion here refers to the High Voltage Test on Circuit Breaker and Isolators.

(a) the constructional and operational characteristics, and

(b) the electrical characteristics of the circuit Which the switch or the breaker has to interrupt or make.

The different characteristics of High Voltage Test on Circuit Breaker and Isolators or a switch may be summarized as per the following groups.

To assess the above factors, the main tests conducted on the circuit breakers and isolator switches are

Dielectric tests consist of overvoltage withstand tests of power frequency, lightning and switching impulse voltages. Tests are done for both internal and external insulation with the switch or circuit breaker in both the open and closed positions. In the open position, the test voltage levels are 15% higher than the test voltages used when the breaker is in closed position. As such there is always the possibility of line to ground flashover. To avoid this, the High Voltage Test on Circuit Breaker and Isolators is mounted on insulators above the ground, and hence the insulation level of the body of the circuit breaker is raised.

The impulse tests with the lightning impulse wave of standard shape are done in a similar manner as in the case of insulators. In addition, the switching surge tests with switching overvoltages are done on High Voltage Test on Circuit Breaker and Isolators and isolators to assess their performance under overvoltages due to switching operations.

Temperature rise and mechanical tests are typetests on circuit breakers and are done according to the specifications.

The most important test carried out on circuit breakers are short circuit tests, since these tests assess the primary performance of these devices, i.e. their ability to safely interrupt the fault currents. These tests consist of determining the making and breaking capacities at various load currents and rated voltages. In the case of isolators, the short circuit tests are conducted only with the limited purpose to determine their capacity to carry the rated short circuit current for a given duration; and no breaking or making current tests is done.

The different methods of conducting short circuit tests are:

(a) Direct Testing in the Networks or in the Fields: High Voltage Test on Circuit Breaker and Isolators are sometimes tested for their ability to make or break the circuit under normal load conditions or under short circuit conditions in the network itself. This is done during period of limited energy consumption or when the electrical energy is diverted to other sections of the network which are not connected to the circuit under test.

The advantages of field tests are: 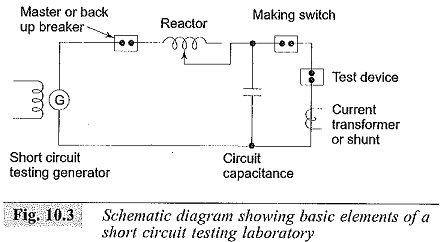 (c) Synthetic Testing of Circuit Breakers: Due to very high interrupting capacities of High Voltage Test on Circuit Breaker and Isolators, it is not economical to have a single source to provide the required short circuit and the rated voltage. Hence, the effect of a short circuit is obtained as regards to the intensity of the current and the recovery voltage as a combination of the effects of two sources, one of which supplies the a.c. current and the other the high voltage.

In the initial period of the short circuit test, the a.c. current source supplies the heavy current at a low voltage, and then the recovery voltage is simulated by a source of comparatively high voltage of small current capacity. A schematic diagram of a synthetic testing station is shown in Fig. 10.4. 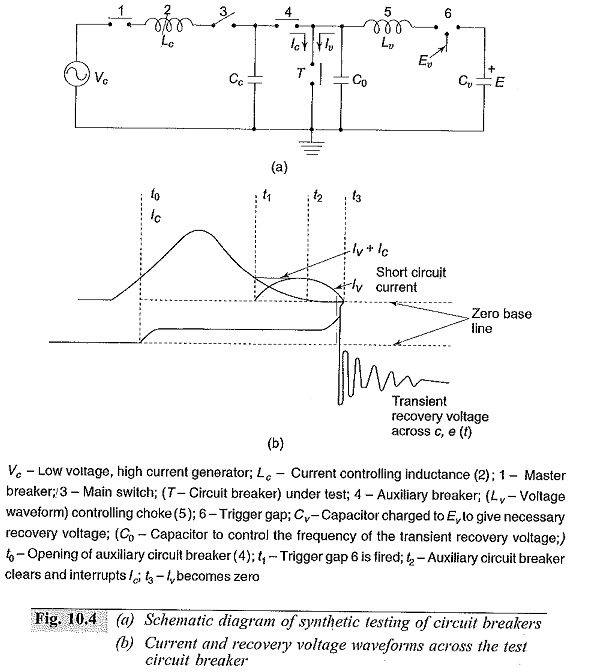 (d) Composite Testing: In this method, the breaker is first tested for its rated breaking capacity at a reduced voltage and afterwards for rated voltage at a low current. This method does not give a proper estimate of the breaker

(e) Unit Testing: When large circuit breakers of very high voltage rating (220 kV and above) are to be tested and where more than one break is provided per pole, the breaker is tested for one break at its rated current and the estimated voltage and gap may not be identical and the voltage distribution along several breaks may be uneven. Hence, certain uncertainty prevails in the testing of one break.

(f) Testing Procedure: The High Voltage Test on Circuit Breaker and Isolators are tested for, their (i) breaking capacity B, and (ii) making capacity M. The circuit breaker, after the calibration of the short circuit generator, is tested for the following duty cycle.

The power factor in these tests is generally between 0.15 and 0.3. The numeral 3 in the above duty cycle indicates the time interval in minutes between the tests.

(g) Asymmetrical Tests: One test cycle is repeated for the asymmetrical breaking capacity in which the d.c. component at the instant of contact separation is not less than 50% of the a.c. component.