The specific requirements demanded of a Ultra High Voltage circuit breaker by system and operator considerations are at present considered to be the following.

Speed of Operation: For Ultra High Voltage systems the speed of breaker opera­tion is very important since a loss of stability would be most serious to the system. A total interrupting time of two cycles or 40 ms is possible. As far as the air-blast breaker is concerned, its main contribution is the high operating pressure available for fast mechanism operation and guaranteed arc extinction in one half cycle of arcing.

Limitation of Switching Surges: Ultra High Voltage systems are not troubled so much by lightning surges as by internally produced voltage surges. Closing on to deenergized lines is the greatest problem and is of more importance than the case of opening lightly loaded long transmission lines. There are three common solutions or combinations of solutions to limit the production of switching over voltages.

Synchronization: In this case a Ultra High Voltage Circuit Breakers is closed only when, for an unenergized line, the source voltage is zero or for an energized line, the voltage across the breaker equals zero. The latter zero, however can be difficult to predict if shunt reactors are on the line. A closing accu­racy of 1 ms is needed and so the physical problems are onerous. 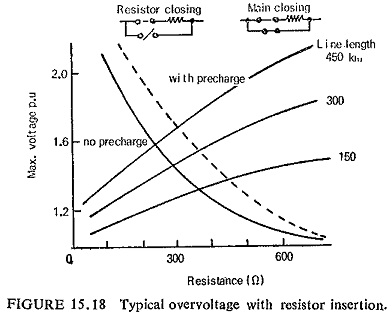 Closing with resistor insertions: Closing with a series resistor 7 to 8 ms before the main contacts reduces the surge phenomenon both on resistor insertion and subsequent shorting. This insertion time has to allow the last reflected surge to return to the breaker, thus equaling the scatter between poles plus twice the transit time to the end of the line. The optimum resistance value is approximately equal to the surge impedance of the line, i.e. 300 to 400 ohms. If the value chosen is too high then the major overvoltage occurs on shorting the resistor and if too low then the over-voltage occurs on resistor insertion. Figure (15.18) shows likely overvoltages predicted from a typical transient network analyzer study. Obviously the correct choice of supply and line parameters is important for accurate forecasting.

Closing with two or more resistors: An extension of the idea above which further limits the overvoltage by sequential switching of higher than lower resistance values prior to the closure of the main contacts. A combination of (i) and (ii) can reduce overvoltages to less than 1.8 pu. It must be borne in mind that surges up to 1.5 pu can be obtained from straight forward three-phase switching transients.

Insulation Coordination: Insulation coordination concerns the use of adequate dimensions for the various components of a transmission system such that any overvoltages occurring should be kept within specified limits and if flashover were to occur it would cause limited damage. In circuit breakers there are two main flash over paths: first to earth via external and internal surfaces and, secondly, across the contacts. For the latter, a uni­form voltage distribution is desirable and the inter contact flashover path is made the stronger of the two by 15 % or so. Surge arresters are used for UHV systems since it is difficult to coordinate solid and gaseous insulations for different geometries and wave shapes at the highest voltages to ensure that flashover occurs where it does the least damage.

Noise Level: Air-blast circuit breakers avoid the risk of fire in or near circuit breakers containing large quantities of oil, but in turn are sometimes criticized because of noise. If the operating air is not permitted to blast into atmosphere but is contained within a closed vessel, then the noise level can be reduced to that corresponding to an oil breaker. This type of enclosed blast circuit breaker may comprise a number of blast heads enclosed within a metal tank, the latter forming the exhaust reservoir. Alternatively the blast heads may be mounted on porcelain support insulators with high and low pressure reservoirs suitably disposed.

The present British maximum for the allowable impulsive noise is approximately 95 dB at 25 m distance and the noise frequency spectrum is generally examined. Audible corona noise which also produces radio and TV interference must be reduced to an acceptable level especially in wet weather by suitable electrostatic stress relief of components.