High Voltage Test on Transformer are very important and costly apparatus in power systems. Great care has to be exercised to see that the transformers are not damaged due to transient overvoltages of either lightning or power frequency. Hence, overvoltage tests become very important in the testing of transformers. Here, only the overvoltage tests are discussed, and other routine tests like the temperature rise tests, short circuit tests, etc. are not included and can be found in the relevant specifications.

High Voltage Test on Transformer by exciting the secondary of the transformer from a high frequency a.c. source (100 to 400 Hz) to about twice the rated voltage. This reduces the core saturation and also limits the charging current necessary in large power transformers. The insulation withstand strength can also be checked.

The purpose of the impulse test is to determine the ability of the insulation of the transformers to withstand the transient voltages due to lightning, etc. Since the transients are impulses of short rise time, the voltage distribution along the transformer winding will not be uniform. The equivalent circuit of a High Voltage Test on Transformer winding for impulses is shown in Fig. 10.11. If an impulse wave is applied to such a network (shown in Fig. 10.11) the voltage distribution along the element will be uneven, and oscillations will be set in producing voltages much higher than the applied voltage. 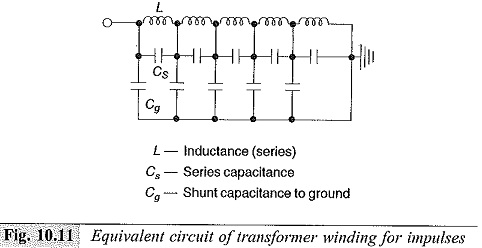 Impulse testing of transformers is done using both the full wave and the chopped wave the standard impulse, produced by a rod gap with a chopping time of 3 to 6 μs. To prevent large overvoltages being induced in the windings not under test, they are short circuited and connected to ground. But the short adjusting the standard waveshape of the impulse generators. It also reduces the sensitivity of detection.

(a) Procedure for Impulse Testing:

The schematic diagram of the transformer connection for impulse testing is shown in Fig. 10.12, and the waveshapes of the full and chopped waves are shown in Fig. 10.13. In transformer testing it is essential to record the waveforms of the applied voltage and current through the windings under test. Sometimes, the transferred voltage in the secondary and the neutral current are also recorded. 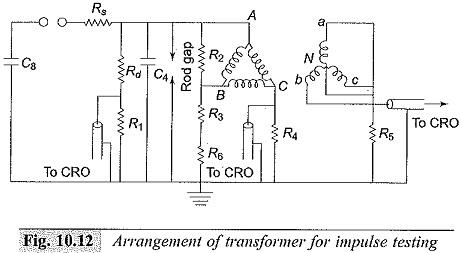 Impulse testing is done in the following sequence:

It is very important to see that the grounding is proper and the windings not under test are suitably terminated. 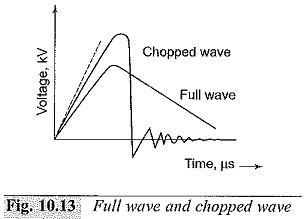 (b) Detection and Location of Fault during Impulse Testing:

The fault in a transformer insulation is located in impulse tests by any one of the following methods.

Voltage oscillogram method: Fault or failure appears as a partial or complete collapse of the applied voltage wave. Figure 10.14 gives the typical waveform. The sensitivity of this method is low and does not detect faults which occur on less than 5% of the winding. 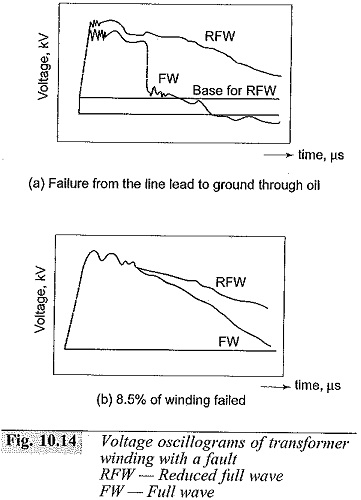 Neutral current method In the neutral current method, a record of the impulse current flowing through a resistive shunt between the neutral and ground point is used for detecting the fault. The neutral current oscillogram consists of a high frequency oscillation, a low frequency disturbance, and a current rise due to reflections from the ground end of the windings. When a fault occurs such as arcing between the turns or from turn to the ground, a train of high frequency pulses similar to that in the front of the impulse current wave are observed in the oscillogram and the waveshape changes. If the fault is local, like a partial discharge, only high frequency oscillations are observed without a change of waveshape. The sensitivity of the method decreases, if other windings not under test are grounded.

Transferred surge current method: In this method, the voltage across a resistive shunt connected between the low voltage winding and the ground is used for fault location. A short high frequency discharge oscillation is capacitively transferred at the even of failure and is recorded. Hence, faults at a further distance from the neutral are also clearly located. The waveshape is distorted depending on the location and type of fault, and hence can be more clearly detected.

After the location of the fault, the type of fault can be observed by dismantling the winding and looking for charred insulation or melted parts on the copper winding. This is successful in the case of major faults. Local faults or partial discharges are self healing and escape observation.