While OC and SC tests on a transformer yield its equivalent circuit parameters, these cannot be used for the ‘heat run’ test wherein the purpose is to determine the steady temperature rise if the transformer was fully loaded continuously; this is so because under each of these tests the power loss to which the transformer is subjected is either the core-loss or copper-loss but not both. The way out of this impasse without conducting an actual loading test is the Sumpner Test of Transformer which can only be conducted simultaneously on two identical transformers.

For the secondaries to be in phase opposition, the voltage across T2T4 must be zero otherwise it will be double the rated secondary voltage in which case the polarity of one of the secondaries must be reversed. Current at low voltage (V2) is injected into the secondary circuit at T2T4. 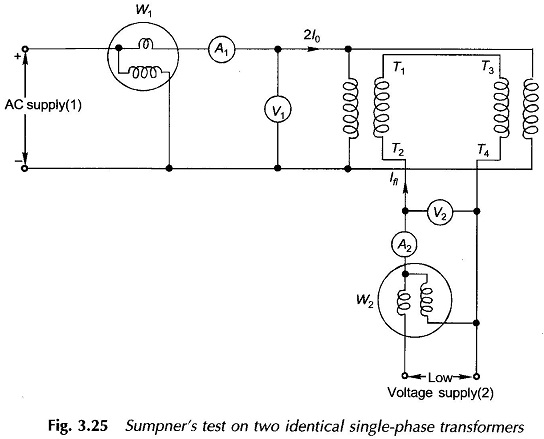 As per the superposition theorem, if V2 source is assumed shorted, the two transformers appear in open-circuit to source V1 as their secondaries are in phase opposition and therefore no current can flow in them.