The two modes of Arc Interruption Methods in Circuit Breakers are:

In this case the arc is controlled in such a way that its effective resistance increases with time so that the current is reduced to a value insufficient to maintain it. The arc resistance may be increased with lengthening, cooling and splitting the arc. The main drawback with this type of Arc Interruption Methods in Circuit Breakers is that the energy dissipated is high and so it is only used in low and medium power a.c. circuit breakers and in d.c. circuit breakers.

This method is employed in a.c. Arc Interruption Methods in Circuit Breakers. A 50 Hz alternating current passes through zero 100 times per second. At every current zero the arc extincts for a brief moment and again the arc restrikes with the rising current. The phenomenon of arc extinction is very complicated and can be explained by number of theories. The two important theories giving some basic concepts are described below.

Slepian’s Theory: The arc which is in the plasma form has voltage stress sufficient to detach electrons from their atomic orbits, the process as a whole being accompanied by the release of great heat. To stop this process, it is necessary to remove the ionized gas, or to produce a state of instability by causing the electrons to recombine at a rate greater than that at which they are being released. By either method the resistance of the arc-path rapidly increases until the path again becomes an insulator. Zero current position offers the most favourable situation for this where residual ionization is small. In other words, the basic problem is to build up the dielectric strength between the circuit breaker contacts. If the rate at which the dielectric strength increases is faster than the rate at which voltage stress rises, the arc will be extinguished; if otherwise the arc may be interrupted for a brief period but it again restrikes. This is illustrated in Fig. (13. 7). 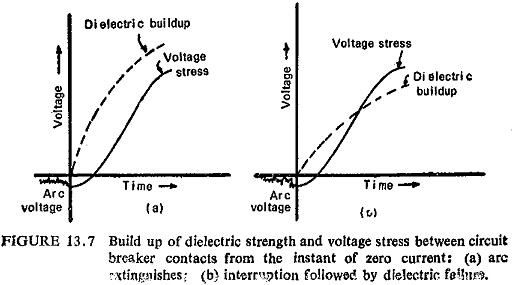 The theory assumes that the restriking voltage and build-up of dielectric strength are independent quantities. This assumption is not quite correct, because the dielectric strength calculations do not agree with the observed values. However the theory explains the arc extinction process in a simple and convincing manner. Slepian was the first to point out that the restriking voltage plays an important role in arc extinction.

Energy Balance Theory: With the development of gas blast breakers where very large amounts of post-arc conductivity could exist and still the circuit could be interrupted. Also the very high rates of rise of restriking voltage did not have such a marked effect on the breaker as one would expect. This led to a consideration as to whether the post zero period could not better be explained in terms of an energy balance rather than as a race for electrical strength. Cassie suggested that, fundamentally, the reestablishment or interruption of the arc is an energy balance process. If the energy input to the arc, subsequent to the current zero continues to increase the arc restrikes, if not, the circuit is interrupted. This suggestion is sounder than the Selpian’s theory. Successful interruption of the arc subsequent to a current zero entails increasing the reignition voltage to a value in excess of any voltage the circuit can produce across the arc.

A post-current-zero energy balance is not the only way that breakers can operate. In dealing with the post-arc conductivity problem it is necessary to go into the aerodynamics of the gas blast breakers more fully. The mechanism of heat loss leads to greater diffusion losses than was originally supposed by Cassie while propounding the theory.