Discharge in a.c. circuit breakers, generally in the form of an arc, occurs in two ways. When the contacts are being separated arcing is possible  even when the circuit emf is considerably below the minimum cold electrode breakdown voltage, because of the large local increase in voltage due to the circuit self-inductance. This way of drawing an arc is common to both d.c. and a.c. circuit breakers. The second method occurs only in a.c. circuit breakers. In this case the Arc in Circuit Breaker is extinguished every time the current passes through zero and can re-strike only if the transient recovery voltage across the electrodes already separated and continuing to separate reaches a sufficiently high value known as breakdown voltage. It is known that the arc phenomenon depends upon:

An ideal gas is a pure dielectric because it consists of molecules which are electrically neutral. It can In made to conduct only when some means are employed to create free electrons and ions in the gas, although some free electrons and positive ions are present in the gas which are created by ultraviolet radiation, cosmic rays, radioactivity of earth, etc. But this as such is insufficient to sustain conduction through the gas. In order to understand how the gas becomes conducting, it must be remembered that a gas consists of molecules moving about with considerable velocities and colliding with one another. Their velocities are not all the same but are grouped about a mean value in a Maxwellian distribution. The mean KE of the molecules 1/2 mv2 is equal to (3/2) KT where T is the absolute temperature and K is the Boltzmann’s constant. It is common knowledge that air molecules at room temperature (300°K) move randomly with approximately 500 m/s and collide very frequently at 1010 times per sec. Nevertheless the KE of these molecules (the average of which is proportional to the absolute temperature) is too low to enable even the fastest particles to damage those with which they collide.

At higher temperatures, however, it happens that the molecules break down at the most severe collisions and dissociate into their atoms. Energies of 9.7eV and 5.1eV respectively are needed to dissociate an N2 or O2 molecule. The degree of dissociation xd is described by the formula

At still higher temperatures some molecules and atoms are deprived of an electron and the hot gas called plasma becomes a conductor. The degree of ionization xi due to thermal collision is described analogously to Eq. (13.1) by

Wi being the energy of ionization.

This thermal ionization resulting from random collisions in a hot gas must be distinguished from impact ionization, which is caused by electrons accelerate in an electric field between two collisions. The latter cause dielectric breakdown, even in a cold gas. Figures (13.1) and (13.2) show variation of Xd,xi thermal conductivity K and electrical conductivity with temperature. 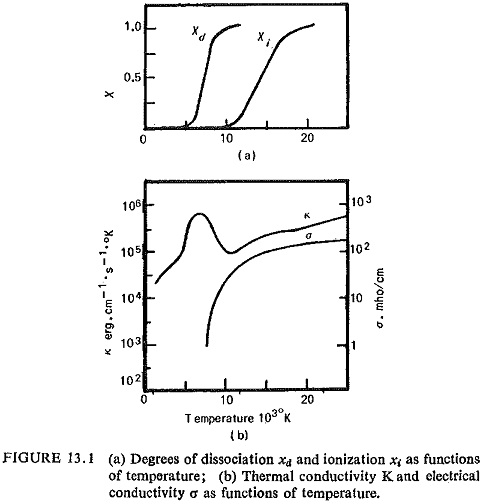 The temperature at which an appreciable number of electrons and positive ions begin to form, thus depends on the degree of ionization of the gas. In normal arc plasma only a very small fraction of the atoms are ionized (about 0.01 %), and the arc temperatures lie in the range 5000°K for H2, 6000°K for N2 and 6000°K for air. In concentrated arc columns such as those in gas blast breakers this figure becomes about 1% and the temperature is then correspondingly 10 to 12 x 103°K for N2. These free electrons can carry an electric current under an electric field in roughly the same way as do the free electrons in a metal. 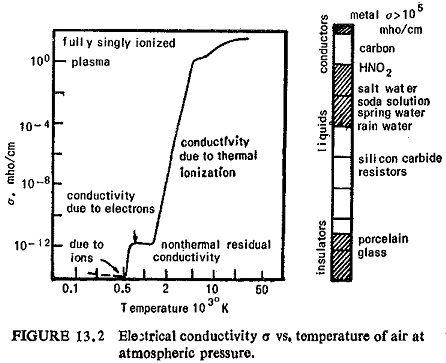 In the arc however the gas is not heated from outside but by electrical energy released in it. The electrons are accelerated in the field of arc and they give up the energy they acquire in this way to the gas when they collide with its atoms or molecules. Now so long as the rate at which energy is imparted by the electrons from the field to the plasma in this way is small compared with the rate of interchange of energy among the particles themselves, the whole plasma will be very nearly in thermal equilibrium and the molecules, ions and electrons will all have the same temperature. This is not always the case; when the arc starts up, or is about to be extinguished or is in glow or diffused form (low pressure), the rate of exchange of energy between the arc and its surroundings becomes comparable to the internal rate of energy exchange and thermal equilibrium breaks down. In the low pressure discharges the atoms and positive ions can be nearly at room temperature, while the electrons may have energies corresponding to 10 to 15 thousand °K. As long as the velocity distribution among the electrons themselves is Maxwellian it is usual to refer to them as having a corresponding temperature.

The electrical conductivity of a metal in its normal state, however, is due to the existence within it of free conductivity electrons, of which there are approximately as many as there are atoms in the metal. Normally these free electrons are prevented from escaping from the boundary of a metal conductor.

A number of processes can cause emission of free electrons from a metal and in the initiation of an Arc in Circuit Breaker. Two of these processes are believed to be important: (1) increase of temperature, giving thermionic emission of electrons, and (2) high voltage gradient at the cathode, causing field emission of electrons. Conditions at the instant of contact separation lead to either or both of these processes. At the time of separation of the contacts, the area and the pressure between the separating contacts decrease rapidly, resulting in an increase of electrical resistance and intense local heating, which may be sufficient for thermionic emission. Although this momentary resistance may only be a fraction of an ohm, the current may be extremely high, many hundreds or thousands of amperes giving a voltage drop of a few volts across the extremely small distance of separation and thus resulting in a high voltage gradient. The voltage gradient may be sufficient to cause the emission of electrons from the cathode and the process is known as field emission. Both types of emission are affected appreciably by the nature, shape and separation of contacts.

However, it is known that with copper contacts normally used in circuit breakers, very little thermionic emission can occur at temperatures below the melting point. The voltage gradient for field emission must be of the order of 106 volts/cm, and hence it is seen that field emission is more responsible for initiating the Arc in Circuit Breaker at contact separation.