Oil Circuit Breaker are extensively employed in our power systems. In these the properties of the arc are employed for arc extinction. Thus by using arc energy to crack the oil molecules, hydrogen gas may be generated which can be used to sweep, cool and compress the arc plasma and so deionize it in a self-extinguishing, process.

Earlier it was thought that the oil acted as an insulator when the breaker was closed and then it flowed into the arc gap when the contacts separated and smothered the arc. But later on experiments showed that it would be quite impossible in the very short time of 1/2 to 1/4 cycle available for oil to flow and smother the arc.

It should be noted that by immersing the interrupting contacts in oil, the production of an arc during contact separation cannot be prevented. However the heat of arc immediately evaporates the surrounding-oil and dissociates it into carbon and a substantial volume of gaseous hydrogen at high pressure. Hydrogen gas has high heat conductivity and this results in cooling the arc column and the contacts, which in turn increases the ignition voltage and thus the arc extinguishes. Hydrogen by its high heat conductivity cools the arc so fast that the voltage required for reignition is 5-10 times as high as that required for air, and thus is best suited for interruption. Moreover it is produced spontaneously in arcs under oil. The arc is embedded deep enough under oil, lest the rising gases may set the surface of the oil on fire. This is an important design consideration.

Interruption of heavy short-circuit currents generate extremely high pressures, which are to be released safely or are to be controlled properly. As a matter of fact, these high pressures can be used to extinguish the very arc which is responsible for high pressures. In addition to the mechanical forces caused by gas pressure and oil movement, there are also present substantial electrodynamic forces on the arc. They tend to increase the area of any loop formed by the current in the circuit breaker and therefore drive the arc to the outside and away from the generating source.

Oil Circuit Breaker has the following advantages as an arc extinguishing medium.

Oil has the following disadvantages as an arc extinguishing medium:

The development of oil circuit breaker has taken place in three major directions:

The early forms of high-voltage designs using oil were of plain break construction, which did not have a special arc extinction system. In this type the arc is confined only within the oil tank. Deionization of arc is due entirely to turbulence and increase of pressure. For successful interruption, a comparatively long arc-length is essential so that the turbulance in the oil caused by the pressures generated by the arc, may assist in quenching it. Because of the absence of effective control over the arc, the arcing times and the amount of energy released before interruption often vary over a wide range, thus making a large factor of safety necessary, in the design of the tank. The tank must be weathertight to keep moisture out. In case there is an air cushion above the oil, the hydrogen gas formed may pass through the oil to mix with the air, to form an explosive mixture unless sufficient pressure is maintained. The head of oil above the contacts must be large enough to prevent the escape of gas in the form of a column to the surface.

It is clear that if the contacts are separated at high speed, the arc length can be greatly increased because of the greater distance the moving contacts travel between current zeros at which interruption occurs.

Welding of contacts may result on short-circuit interruption if the speed of contact movement is slow.

The main features that have an important bearing upon the performance of a plain-break oil circuit breaker are:

By increasing the size of the tank, head of oil, length of break and insulation; it is possible to obtain breakers for higher voltage and larger interrupting capacities. However, circuit breakers of this type are not considered satisfactory above 11 KV and 250 MVA. 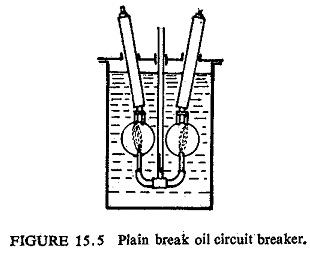 In principle this type of breaker with two interruptions in series is shown in Fig. (15.5).

The bulk oil circuit breakers generally employed in our power systems are of this type. In these the gases produced during arcing are confined to small volumes by the use of an insulating, rigid are chamber surrounding the contacts. Thus, higher pressures can be developed to force the oil and gas through or around the are to extinguish its These small, high pressure resistant chambers are known as are control pots or sometimes as explosion pots. Apart from their efficiency of are interruption these explosion pots have substantially brought down the risks of fire hazard. With the improvement in the design of the are control pots, great reductions have teen effected both in arc duration and total break time.

For higher voltages and higher breaking capacities large amounts of oil are required and the size of the bulk oil circuit breaker described above becomes inordinately large. For example, a 110 KV 3500 MVA breaker takes 8 to 12 thousand kg of oil, while a breaker of the same rating qut for 220KV takes 50 thousand kg of oil. The minimum oil circuit breaker uses solid materials for insulating purposes and uses just enough oil for arc quenching. The interrupting device is enclosed in a tank of insulating material, the whole of which is at line voltage in normal operation. These are also known as live tank breakers as against dead tank breakers of the bulk oil type. The minimum oil circuit breakers may be of self-blast type, external blast type or a combination of the two.

In self-blast circuit breakers the force with which the arc is quenched adapts itself to the current to be broken; larger the short-circuit current more is the oil decomposed and more is the amount of gas developed for cooling the plasma. For this reason self-blast type minimum oil circuit breaker quenches the arc more effectively as the current increases. However the gas pressure in the chamber also increases with the increasing short-circuit current, which imposes a mechanical stress limitation on the circuit breaker. The limit of breaking capacity is therefore not set by the principle of arc quenching but by the mechanical strength of the arcing. chamber. With the use of modern insulating materials for the manufacture of arcing chambers such as glass fibre reinforced synthetic resins, the minimum oil circuit breakers are able to meet easily the increased fault levels of the systems.

Most of the current designs employ self-generating blast principle

Two types of venting are used in the design of their arcing chambers, viz. axial venting and radial venting. In axial venting the gases sweep the arc in longitudinal direction while in radial venting the arc is blown in trans­verse direction. Axial venting has the advantage that it generates high pressures and also has high dielectric strength. Axial venting is mainly where low currents are to be interrupted at high voltages. Radial venting generates low pressures and also has low dielectric strength. It is mainly suitable for breaking heavy currents at low voltages. At times a combina­tion of both is used so that arcing chamber is equally efficient at low as well as at high currents. These arcing chambers however suffer from the disadvantage that at very low currents, called critical current, they have a long arcing period. These critical currents generally lie between 10 to 100A. 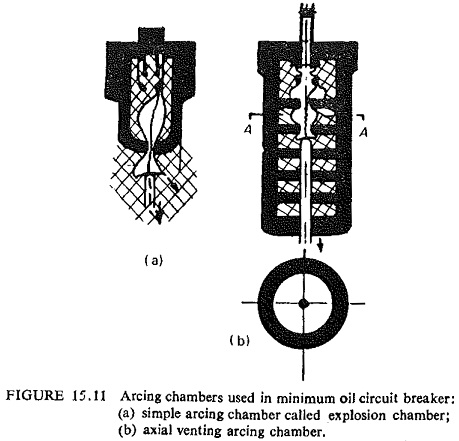 In certain designs in addition to self-blast, separate oil injection devices are also used. This method eliminates critical currents, making arcing time virtually independent of the value of interrupted current. The various arrangements of the arcing chambers used in the minimum oil circuit breaker are shown in Fig. (15.11). The contacts are usually operated by pull rods or rotating insulators actuated in turn by pneumatic or solenoid mechanisms.

The single break minimum oil circuit breaker offers the most simple and economic solution for moderate fault levels where very short interruption timings are not required. This type is available up to 8,000 MVA at 245 KV with a total break time of 3 to 5 cycles.