Generating capacity the world over has been increasing at phenomenal rates. Compared to the increase in generated power the breaking capacities of Circuit Breaker Tester show an even faster rise. Figure (16.1) shows, for instance, the increase in breaking capacities of circuit breakers, which indicates a growth rate of 10% per annum. This development is essentially determined by two factors first, the growth in generating capacity and, secondly, the increasing trend towards interconnection of systems. 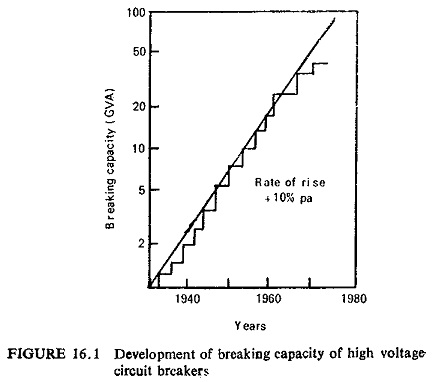 The high energy density in the large cities today also forces the power supply undertakings to supply HV direct into the distribution systems, and the space taken up by switchgear must be kept to an absolute minimum owing to the high price of land. Switchgear installed in built-up areas must also have a very low noise level. When a breaker interrupts heavy fault currents, which today may attain values as high as 60,000A, the temperature inside may rise up to 30,000°K. Circuit Breaker Tester of the latest design are capable of interrupting currents under these conditions with an arc duration of 5 to 20 ms.

Oil, an obviously inflammable substance for extinguishing the hot arc is a well proven medium because it releases hydrogen which by virtue of its low mass and high velocity is an excellent cooling medium. On the other hand modern circuit breakers employ heavy gas —SF6 as the medium for quenching the arc. This noncombustible heavy gas has strong affinity for electrons, which tend to capture free electrons and thus prevent them from forming an electron avalanche that promotes reignition of the arc after it had lost its conductivity.

Air-blast circuit breakers use air as medium at very high pressures up to about 100 atmospheres whereas recently vacuum as medium at very low pressures of the order of 10-6 torr has been used with increasing success. This is mainly because the medium has virtually no particles present of any kind to be ionized and to provide a pathway between the open contacts.

An arc in a d.c. circuit of any voltage could be interrupted by a device that would introduce ample deionizing effects. However, practical limitations make it very difficult to design Circuit Breaker Tester for use in d. c. circuits above a few thousand volts.