Transistor Tester and its characteristics:

The term Transistor Tester (or analyser) used in this text is for instruments giving quantative measurements of transistor parameters. The tester should be able to provide direct readings for at least two important measurements, such as:

The latter measurement of C to B reverse current is generally regarded as most significant to test for the ageing of a transistor. It is an comparatively difficult measurement because of the small currents involved (in μA), and because of its extreme temperature sensitivity.

If there is a breakdown (usually from collector to emitter), the indicating meter tends to read full scale deflection. In that case, no further tests are performed on that transistor , thus avoiding possible damage to the meter circuit.

If the reading in the short position is less than the maximum allowable amount indicated on the chart, the next test for reverse current Icbo, is set up.

Collector-leakage current is a function of the temperature and resistivity of the material of the transistor. Excessive leakage generally occurs when the conductor surface is contaminated. Other causes of this condition are overheating, or other types of damage. This is reverse current from the collector to the base, with the emitter open, denoted Icbo. An excessive Icbo indicates a faulty transistor. The tester circuit for this test is illustrated in Fig. 10.19(a). The collector-base junction is reverse biased and the emitter is open. The ammeter (in the micro range) indicates the reverse current.

Current from the collector to the emitter with an open base is denoted Iceo .Figure 10.19(b) illustrates the circuit for this test. Iceo should be expected to be much larger than Icbo.

Direct current gain is a measure of the effectiveness of the base in controlling collector current. It is a useful parameter for transistors used in low frequency power, amplification, switching, and control circuits. This test is useful only if the transistor is used in a common-emitter configuration. 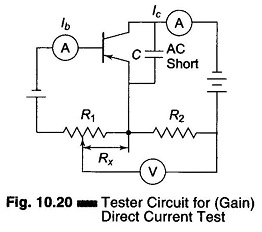 Figure 10.20 illustrates the tester circuit used for test. R1 is adjusted for a null on the voltmeter, at this point the dc gain is equal both to Ic/Ib and Rx/R2.R1 usually has a calibrated dial to provide a direct reading of dc gain.

As a transistor ages, there is a tendency for the dc gain to decrease. This causes the amplification to decrease, which leads to distortion of the signal.

If the transistor is in a common-emitter configuration, the amplification factor is beta β, which is the ratio of the change in collector current to the change in base current when the collector voltage is held constant. The collector has an ac short to the emitter during this test.

There is a definite relationship between alpha and beta, so that either may be calculated when the other is known.

The test circuit for measuring beta is similar to that for measuring dc gain (see Fig. 10.20). The primary difference is that the beta measurement requires an ac signal at the transistor base. The proper values of either beta or alpha are given on the manufacturer’s data sheet. The measured values should match these fairly closely, if the transistor is good. 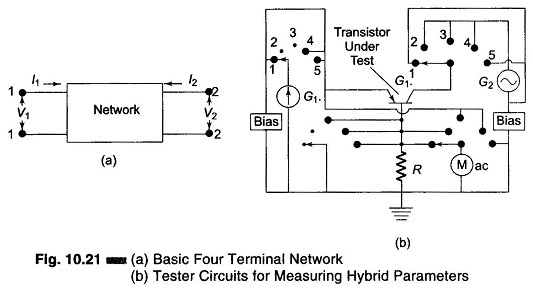 Hybrid parameters are very useful in determining the quality of a transistor. The four terminal network is shown in Fig. 10.21(a).

The unit of measure for hi is ohms, and for ho is mhos. There are no units for hf and hr, since they are ratios.

The h parameters can be applied to any of the three basic amplifier configurations. An additional subscript letter is generally used to designate the type of configuration. Subscript b indicates common-base, e designates common-emitter and c denotes a common-collector.

The tester circuit for obtaining h parameters is illustrated in Fig. 10.21(b). G1 is a calibrated current generator and G2 is a calibrated voltage generator. The ac meter is used to indirectly measure current. The switches are four ganged sections of a five position rotary switch.

Position 1 of the switch connects the calibrated current generator to the emit­ter of the transistor under test. The ac meter indicates I+ hf which is the ratio of the ac base current (ib) to the ac emitter current (ie)

Position 2 of the switch connects the calibrated voltage generator to the collector, and the meter indicates the output admittance, ho. The emitter is open during this measurement.

This tester checks the transistor for polarity (PNP or NPN). An audible signal gives an indication of gain. This tester is illustrated in Fig. 10.22. 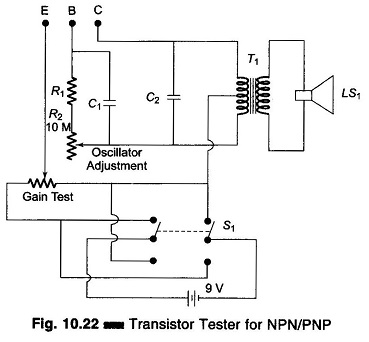 The tester can also be used as a GO/NO GO tester to match unmarked devices.