These breakers employ a high pressure air-blast as an arc quenching medium. The contacts are opened in a flow of air-blast established by the opening of blast valve. The Air Blast Circuit Breaker Diagram cools the arc and sweeps away the arcing products to the atmosphere. This rapidly increases the dielectric strength of the medium between contacts and prevents from re-establishing the arc. Consequently, the arc is extinguished and flow of current is interrupted.

An Advantages of Air Blast Circuit Breaker over all oil circuit breaker:

The use of air as the arc quenching medium offers the following disadvantages of air blast circuit breaker :

Depending upon the direction of air-blast in relation to the arc, Types of Air Blast Circuit Breaker Diagram are classified into :

(i) Axial Blast Circuit Breaker: Fig 19.9 shows the essential components of a typical axial blast air circuit breaker. The fixed and moving contacts are held in the closed position by spring pressure under normal conditions. The air reservoir is connected to the arcing cham­ber through an air valve. This valve remains closed under normal conditions but opens automatically by the tripping impulse when a fault occurs on the system 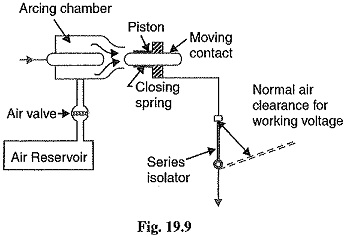 When a fault occurs, the tripping impulse causes opening of the air valve which connects the circuit breaker reservoir to the arcing chamber. The high pressure air entering the arcing chamber pushes away the moving contact against spring pressure. The moving contact is separated and an arc is struck. At the same time, high pressure air blast flows along the arc and takes away the ionised gases along with it. Consequently, the arc is extinguished and current flow is interrupted.

It may be noted that in such circuit breakers, the contact separation required for interruption is generally small (1.75 cm or so). Such a small gap may constitute inadequate clearance for the normal service voltage. Therefore, an isolating switch is incorporated as a part of this Types of Air Blast Circuit Breaker Diagram. This switch opens immediately after fault interruption to provide the necessary clearance for insulation.

(ii) Cross Blast Circuit Breaker: In this type of Cross Blast Circuit Breaker, an air-blast is directed at right angles to the arc. The cross-blast lengthens and forces the arc into a suitable chute for arc extinction. Fig. 19.10 shows the essential parts of a typical cross blast air circuit breaker. When the moving contact is withdrawn, an arc is struck between the fixed and moving contacts.The high contact pressure cross-blast forces the arc into a chute consisting of arc splitters and baffles.

The splitters serve to increase the length of the arc and baffles give improved cooling. The result is that arc is extinguished and flow of current is interrupted. Since blast pressure is same for all currents, the inefficiency at low currents is eliminated. The final gap for interruption is great enough to give normal insulation clearance so that a series isolating switch is not necessary. 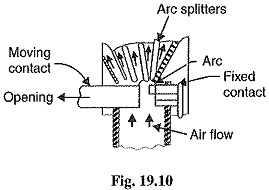